US Capital Markets Are the Largest in the World

The U.S. capital markets are the largest in the world and continue to be among the deepest, most liquid and most efficient.

Equities: U.S. equity markets represent 41% of the $75 trillion in global equity market cap, or $30 trillion; this is 3.8x the next largest market, the EU (excluding the U.K.).

Fixed Income: U.S. fixed income markets comprise 40% of the $103 trillion securities outstanding across the globe, or $41 trillion; this is 1.9x the next largest market, the EU (excluding the U.K.).

Capital markets recognize and drive capital to the best ideas and enterprises. Coupled with the free flow of capital, innovation is an integral component for supporting job creation, economic development and prosperity. Markets facilitate the transfer of funds from those who seek a return on their assets to those who need capital and credit to grow.

Clients benefiting from healthy capital markets include not just investors but also governments and corporations. Capital, raised through equity and debt, can be used to grow businesses, finance investments in new plant, equipment and technology and fund infrastructure projects. This creates jobs and flows money into the economy. Additionally, individuals and businesses can invest in securities to generate wealth. 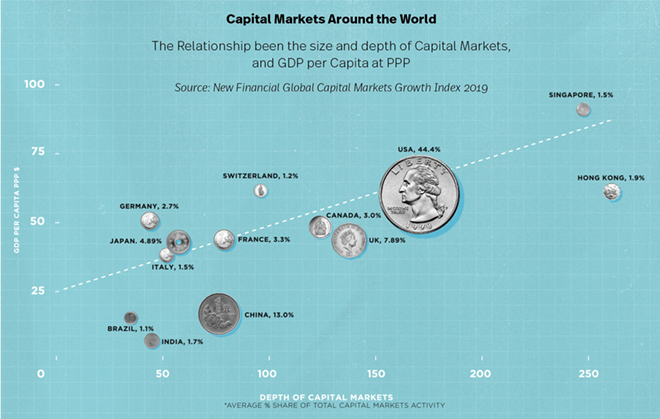 Source: GFMA/New Financial report (as of 2017)
Note: The size of each bubble denotes the average % share of total capital markets activity in the 25 sectors of activity studied

In the U.S., capital markets provided 65% of funding for economic activity. Capital markets enable debt issuance, which is a more efficient, stable and less restrictive form of borrowing for corporations. The use of debt capital markets to fuel economic growth is more prevalent in the U.S, at 79% of the total, whereas bank lending is more dominant in other regions, around 21% on average.

On the equities side, companies need capital for various business purposes – to invest in growth, fund mergers and acquisitions, etc. – and firms have several ways they can generate capital, including issuing IPOs. IPOs allow businesses to grow, innovate and better serve their customers.

In short, U.S. capital markets are the bedrock of our nation’s economy. 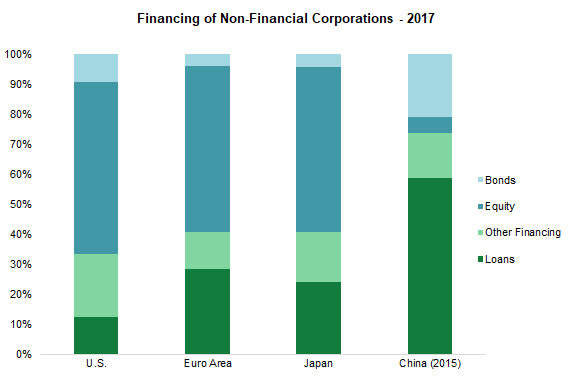 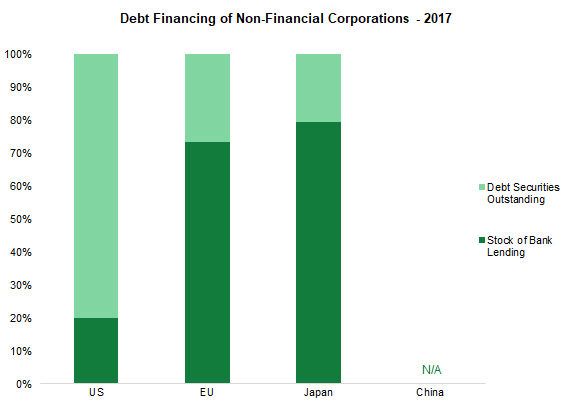