Just as the world is coming out of a 100-year pandemic, still uncertain what the “new normal” will be, we are now facing considerable economic headwinds. Inflation has climbed to a 40-year high.  Interest rates are rising. Geopolitical events threaten to upend how the global economy has functioned for decades. Supply chain disruptions persist. Bottom line: while the worst of COVID appears behind us, there are a lot of unknowns in the world today.

To get through this unpredictable and volatile time, the U.S. capital markets – and the businesses, workers, and families that depend on them – need certainty, stability, and prudence from Washington. Unfortunately, the Securities and Exchange Commission (SEC) is pursuing an unprecedented rulemaking agenda that could compound our current challenges and result in adverse consequences for the real economy in terms of output, employment, investment, and prices.

As of last fall, the SEC had 54 separate items on its rulemaking agenda, according to the Office of Information and Regulatory Affairs’ (OIRA). This represents “one of the most ambitious agendas in the SEC’s 87-year history,” according to Bloomberg.  In fact, in just the first quarter of 2022, the SEC issued 16 new rule proposals, which is only the third time in the 21st Century that it has put out more than 8 new rules in Q1. In the first quarter of 2004 and 2011, the SEC released, respectively, 16 new rules following the accounting and corporate scandals of Enron and WorldCom and 17 new rules following the global financial crisis and Dodd-Frank Act. Excluding 2004, 2011, and 2022, the SEC has issued an average of 3.3 new first-quarter rule proposals since 2000. Unlike those two previous periods, the 16 SEC rules that were released in Q1 2022 are not responding to a major crisis driven by financial institutions, markets or public companies. Rather, financial institutions and markets have been a helpful and important source of strength and stability during the challenge of the past few years.

What is the impact of this policy uncertainty on the economy? Again, peer reviewed economic research has explored this question, and the findings are significant. Economists find that heightened uncertainty has a real and significant negative effect on economic performance. Specifically, in “Measuring Economic Policy Uncertainty”, Scott R. Baker, Nicholas Bloom, and Steven J. Davis find “that policy uncertainty is associated with greater stock price volatility and reduced investment and employment in policy-sensitive sectors like defense, healthcare, finance and infrastructure construction. At the macro level, innovations in policy uncertainty foreshadow declines in investment, output, and employment in the United States.” These findings are important, especially given the considerable social, geopolitical, and economic uncertainties facing the world today.

Injecting regulatory uncertainty into many aspects of the U.S. capital markets could result in adverse consequences. The process of implementing large-scale changes to federal regulations, like those issued by the SEC, can take several years and is often marked by deep uncertainty caused by litigation challenges and the need for further rulemaking to clarify inconsistencies or resolve problems in the original rule that surface during implementation. In such conditions, investors, securities firms, and other market participants might respond to heightened uncertainty over the “rules of the road” by pulling back from investing in securities and bonds, which could make it harder and more expensive for businesses to raise capital and, in turn, impact the employees and customers of business across every sector of the economy. Companies might be forced to wait to offer new products, invest in infrastructure, and generally be more cautious about their investment and hiring decisions.

The harmful effects of rising policy uncertainty underscore the danger of simultaneously implementing a large number of interrelated, untested policy changes and point to the need for the SEC to streamline and prioritize its regulatory agenda.

SEC rulemaking does not occur in a vacuum. The capital markets have long been one of the most regulated sectors of our economy. Chart 1 shows the multitude of new regulations issued by the SEC and other federal agencies impacting participants in the capital markets. Implementing all these new rules on a compressed timeline has the potential to create risk by overtaxing technological, operational, and compliance resources of financial institutions of all sizes.

Designing and implementing each of these proposals individually – let alone all at the same time – is a major regulatory undertaking that needs thoughtful consideration, especially given the state of the global economy today. Accelerating these rules through the regulatory process impairs the SEC’s ability to fully analyze the proposals and understand their possible adverse consequences.

A case in point is proposed rule 10B-1, which sets forth security-based swap (SBS) position reporting requirements. As noted extensively in the public comments, the SEC’s cost-benefit analysis of 10B-1 does not account for several significant potential adverse impacts. For example, the Council for Investor Rights and Corporate Accountability stated, the SEC “fails to evaluate the chilling effect that the Proposed Rule will have on activist investors and the harmful collateral effects that a reduction of such corporate activism will have on retail investors and other stakeholders.” Other commenters noted that the SEC did not analyze the proposal’s impact in terms of curtailed market activity, reduced liquidity, and constrained capital formation for issuers and borrowers.

But these comments, and many more like them, do not account for the “unknown unknowns” – the unintended consequences of new regulations that are impossible to foresee in advance.  Will changing SPAC regulations hinder capital raising? Will changing aspects of reporting securities lending arrangements and short sale activity impact stock market liquidity? The number and potential impact of these unintended consequences increase with the interconnectedness of our financial system and the broader economy.

A central lesson of the 2008 financial crisis was that there are deep, complex, and often hard to anticipate interconnections within our financial system and across the broader economy.  This interconnectedness increases the risk that the SEC’s current “everything rulemaking agenda” will lead to harmful unintended consequences.

Consider the SEC’s money market mutual fund proposal. Money market funds are a key source of banks’ short-term wholesale funding, but this proposal could impede banks’ ability and willingness to utilize them, especially in the context of swing pricing. Banks, therefore, might be forced to rely more on longer term funding, which likely would increase funding costs. If this scenario materializes, banks will have to either pass on the higher funding cost to the real economy or risk lower earning ability which in turn could negatively impact capital ratios.

SEC Staff Accounting Bulletin No. 121, though not a formal rulemaking, could also have unintended impacts.  This staff-level guidance has the potential to force financial institutions that custody crypto-assets to bring these crypto-assets on balance sheet for accounting purposes.  If these financial institutions also are bank affiliates subject to prudential regulations, the SEC’s SAB could have direct prudential capital consequences.

As we learned in 2008, many interconnections within our financial system and across the economy only become visible in a stressed environment. And a significant body of economic research suggests that rushing through a multitude of sweeping regulatory changes simultaneously could contribute to such stressed conditions.

A Well Thought-Out, Measured & Prioritized Agenda Is the Most Prudent Approach

We believe a more prudent approach to the “everything rulemaking agenda” is for the SEC to prioritize the most pressing regulatory issues that support market resilience and efficiency and to allow for more meaningful stakeholder input and evaluation of rule proposals’ cumulative impacts. In doing this the SEC should consider not only each individual issue, but also its possible connection with other issues and how any proposed changes might compound our current economic challenges like inflation. The SEC should also act in a deliberate manner that provides markets and investors with enough time to absorb the impact of new rules so as to moderate the total amount of uncertainty created through the regulatory process. There are certainly areas of our capital markets in need of reform, but any changes must be implemented with caution and care with an eye towards managing and improving the overall financial system.

The chart below illustrates the implementation timeline for a broad range of financial regulations in various stages of proposal or implementation. As shown, the simultaneous implementation of a multitude of rules on a compressed timeline could strain SIFMA members’ resources and has the potential to create risk by overtaxing industry technology, operational, and compliance resources. Financial institutions of all sizes and business models will be impacted by some or all these regulations to varying degrees. Additionally, the timelines are subject to change as the industry adopts new rules and amendments. 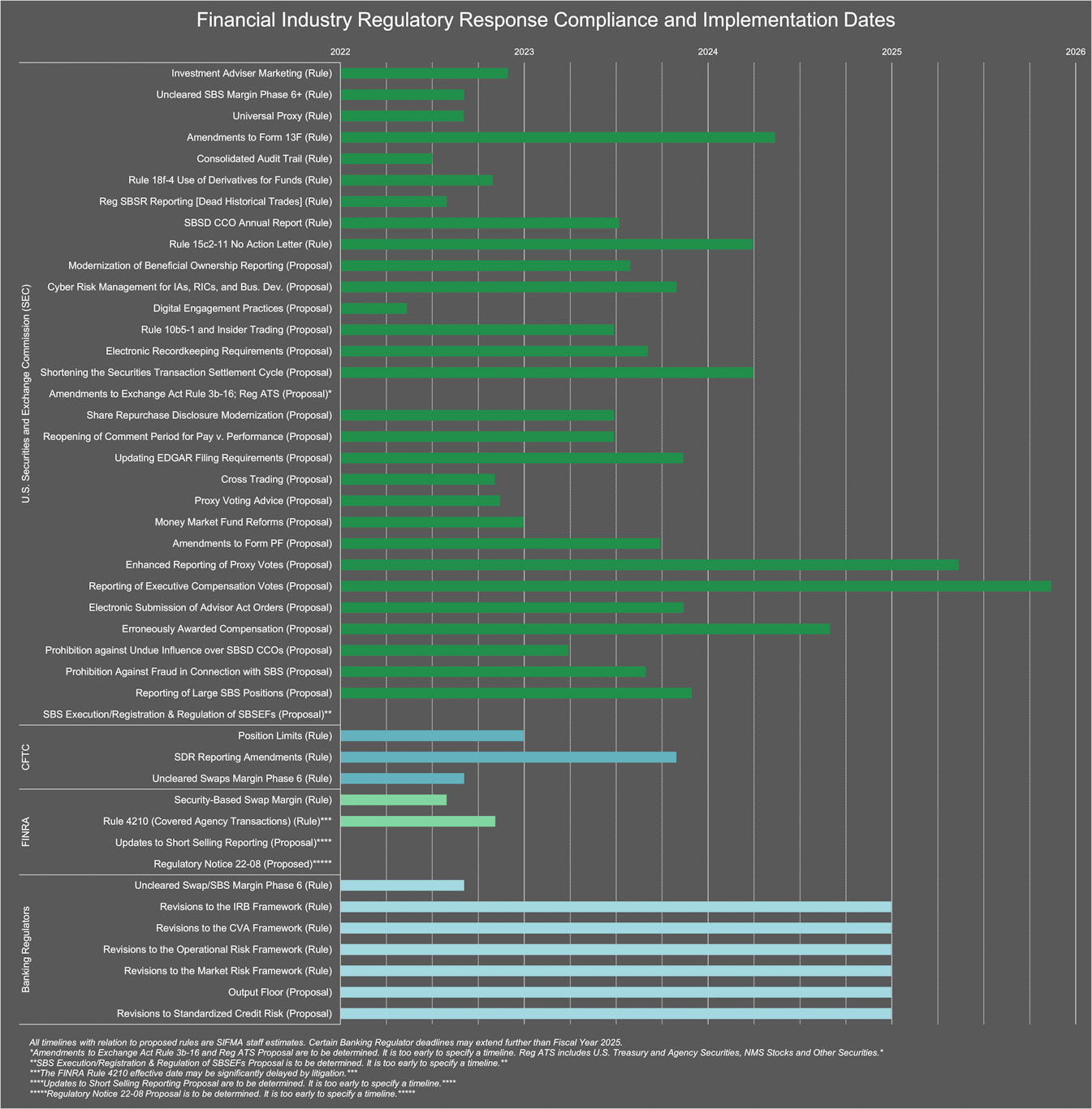 Sean Campbell is the Chief Economist, Head of Policy Research at the Financial Services Forum.