The COVID pandemic has undeniably injected a high degree of uncertainty into all of our lives.  Basic questions around when our kids will go to school, where we will work, and when life will return to “normal” have occupied our collective conscience for the past few years.  The Russian invasion of Ukraine has created additional uncertainty about our global economy and inflation, and has led to questions about how businesses will have to adjust.  For financial institutions and financial markets, heightened uncertainty can stifle activities and use of resources, creating opportunity costs or other costs.

Recently, the Securities and Exchange Commission (SEC) has embarked on a wide-ranging and ambitious agenda to significantly change existing market rules and practices over a short period of time across a variety of interrelated markets.  At the same time, U.S. capital markets have performed extraordinarily well against recent global events.  Changing the “rules of the road” across an array of connected markets represents an unwelcome source of uncertainty – regulatory uncertainty – that is likely to negatively impact markets and the economy.  In this post, we highlight recent research on the impact of uncertainty on the economy and extend previous research to directly incorporate the impact of regulatory uncertainty.  Consistent with previous findings, U.S. data indicate that increasing economic policy and regulatory uncertainty have important, negative consequences for the broad economy that can persist for an extended period of time.  While added uncertainty should not be used as a blanket objection to all regulation, the negative impacts of heightened uncertainty should be directly considered by regulators as increasing regulatory uncertainty may compound other significant uncertainties and impede the ability of capital markets to continue to support the economy as they have over the past few years.

The idea that rising uncertainty retards economic growth is well-accepted among economists.  When households and businesses are uncertain about the future, they postpone investment and spending plans, which reduces growth.  At the same time, empirically measuring the size of this effect is challenged by a lack of good and comprehensive data on “uncertainty.”  Uncertainty is, by its very nature, hard to quantify and many simply claim that they can “feel” uncertainty.  In economic analysis, “feelings” count for very little – hard data are needed. 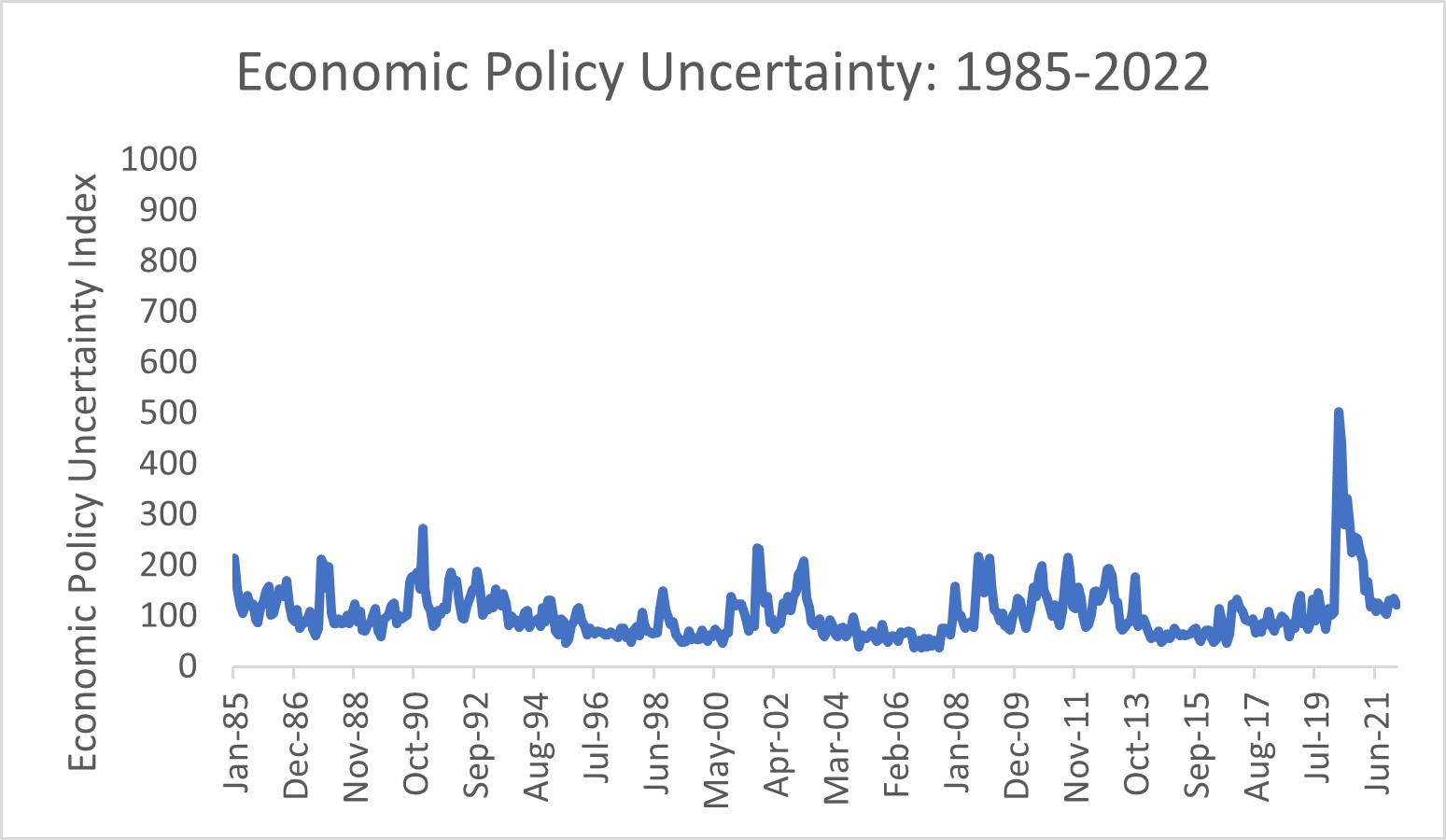 The main findings of their research are reproduced below.  The chart below shows the dynamic impact on industrial production from an increase in economic policy uncertainty.  As shown in the chart, an increase in policy uncertainty immediately depresses output and the impact worsens and remains negative for nine months before leveling off to zero.  Accordingly, rising uncertainty depresses output immediately, but also results in a “hangover” that persists for several months. 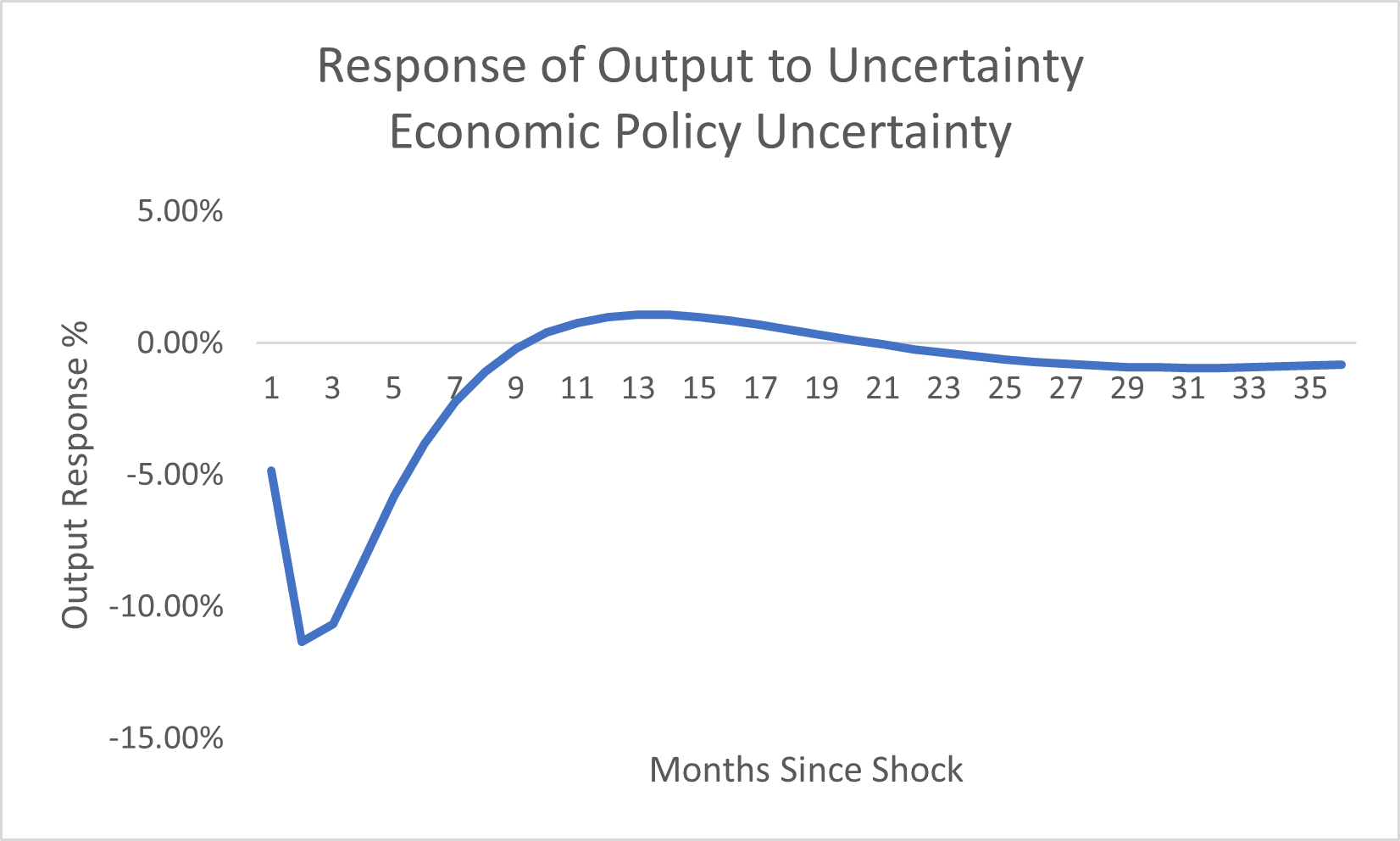 The underlying rationale for the identified negative impact of financial regulatory uncertainty is likely similar to that identified by the authors of the aforementioned research.  Increasing uncertainty over financial regulation and the “rules of the road” make it difficult for financial intermediaries and end users alike to plan, invest, and engage in financial market activities that support the economy.  The long-lived nature of the negative impact may also relate to the often-lengthy process by which financial rules are changed.  Uncertainty that results from a spate of new rule proposals, for example, may hang in the air for years until new rules are finalized and implemented.

Implications for the SEC Rulemaking Agenda

Both previous research and the newer results presented here show that increasing economic and regulatory uncertainty places a measurable drag on the economy for up to two years.  As we have recently highlighted, the SEC has engaged in a large number of rulemakings that simultaneously impact a number of interrelated markets.  The sudden, rapid-fire slate of proposals represents a measurable increase in regulatory uncertainty that may not be fully resolved for a number of years.  At the same time, these results should not be interpreted to imply that any change to financial rules is problematic.  That is not the case.  Over time, as markets and economies evolve, all regulation can benefit from being updated to account for new realities.  These changes, however, must be approached methodically and systematically.  Relatedly, and as discussed in our recent comment to the SEC, proposals should be subject to reasonable comment periods that give the public ample time to reflect and respond on how proposed changes affect the market under consideration, related markets, and the broader economy.  More still, it may well be sensible to allow for the adoption of some new rules to mature and “settle out” before pursuing yet more changes to financial markets.  A rushed “ready, fire, aim” approach to regulation may well do more harm than good as the negative consequences of increased uncertainty outweigh any other potential benefits.

Some amount of uncertainty and risk is a necessary part of life that can’t be avoided.  At the same time, the evidence is clear that increasing uncertainty places a drag on the economy that can persist for years.  The world now finds itself faced with a number of sources of significant uncertainty.  We are still working our way through the pandemic and the latest virus variant.  The macroeconomic picture is clouded by inflation that is at a 40-year high and rising.  Geopolitical uncertainties are also at a high not seen in decades.  In the midst of all this uncertainty, regulators should take great care in how they approach financial regulation that may cloud the picture even more.  In addition, the U.S. capital markets have been a clear bright spot over the past few years as companies, municipalities, and the U.S. government have all made significant use of market-based finance to manage through the pandemic.  Regulators should ensure that they successfully steward the capital markets that have been such a source of strength and resiliency through these highly uncertain times.

Sean Campbell is the Chief Economist, Head of Policy Research at the Financial Services Forum.

Just as the world is coming out of a 100-year pandemic, still uncertain what the “new normal” will be, we…