By: By Michael Decker 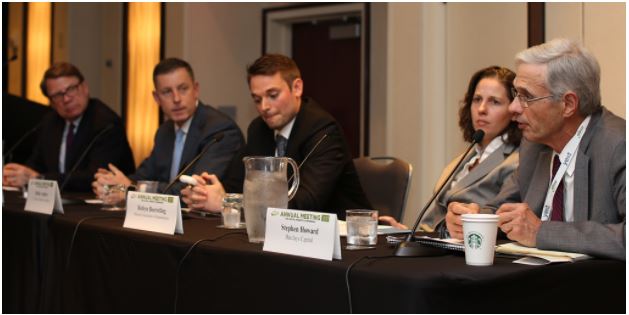 Panelists at the breakout session, Infrastructure Finance: The $1 Trillion Question at SIFMA’s 2017 Annual Meeting, The Capital Markets Conference. The American Society of Civil Engineers (ASCE) gave America’s infrastructure an overall grade of D+ in 2017, along with an estimate of more than $4 trillion needed to upgrade or rebuild existing roads, tunnels, bridges and other infrastructure.

“We track the P3 end of the market,” said Stephen Howard at Barclays. Holding up a list of 43 projects across the country, Howard stated 25 have real potential for development. The same list five years ago was probably half this length. With gradual, incremental tweaks at the federal level, he expects the list to grow to 50-60 projects in the next five years with 30 likely candidates for development. Now, he said, “it boils down to how local jurisdictions can get shovel-ready projects.”

“There is I believe plenty of capital,” said Western Asset Management Company’s Robert Amodeo. “I am bidding [on projects] every month whereas two years ago I was bidding every 12 months. There are more projects and they are more interesting, but there is still too much capital chasing too few investment opportunities.”

Experts at The #CapitalMarkets Conf note no single policy can address all #infrastructure issues but investment opportunities are increasing pic.twitter.com/SMQu849igs

U.S. infrastructure is so complex, noted the panelists, that a single policy option cannot address all existing concerns. Tax credits for instance, said Robert Andres, tax and economic policy advisor for the U.S. Senate Committee on Finance, are “a targeted tool but not a panacea.”

The Administration has a role to play, and it doesn’t necessarily need to be top-down, said Robyn Boerstling of the National Association of Manufacturers. Projects aren’t getting built in some places and that is for a reason. “Multi-jurisdictional states are a headache – the Administration can and should find a way to break those logjams. Eliminate showdowns and slow downs.”

Why not to expect Congress to do anything about infrastructure https://t.co/9d1lp01XV2

At the close of the discussion, Hamel asked the panelists to envision they were invited to Mar-a-Lago. “What ideas would you pitch to the President on infrastructure?”

Amodeo called for better government coordination, optimization of vehicles used to get capital to communities, and seeking ways for the public sector to earn better returns on their portfolio. Andres urged a focus on funding. Boerstling said we should identify specific projects and lean on the strong support from the business community. Howard wants to expand the exemptions for private activity bonds and the Transportation Infrastructure Finance and Innovation Act (TIFIA) to support funding for greenfield projects.

SIFMA believes we can close the infrastructure gap by preserving the tax exemption of municipal bonds, expanding the use of private activity bonds, promoting design-build as a procurement mechanism for state and local governments, providing a tax credit for equity investors in infrastructure projects, expanding alternative federal financing programs, and permitting the use of new financial instruments for infrastructure finance. For more on our positions, see:

So, are we shovel-ready? Capital is ready and waiting. What we need now are the projects and the legislation to encourage them.

SIFMA has designated this February SIFMA Muni Month, during which we plan to meet with members of Congress and work…

The Bond Buyer: How do we close the infrastructure gap? Restoring advance refunding is a start

The following Op-Ed was originally published in The Bond Buyer on May 17, 2019. America faces an extraordinary infrastructure deficit.…

The Bond Buyer Op-Ed: Rightsizing the Regulation of Infrastructure Debt

The following Op-Ed was originally published in The Bond Buyer on May 17, 2018. Congress appears poised to pass financial…