Recently, SIFMA hosted its 46th annual Operations Conference & Exhibition, which included a panel of U.S. and European global investment banks and a consultant discussing the current state of Brexit. Inside this note we update the state of Brexit and provide a history of the EU, the U.K.’s entry to the EU and the latest Brexit timeline.

After delaying the original March 29 deadline for exiting the European Union, the U.K. is now on its second extension, running through October 31, 2019. U.K. Prime Minister Theresa May was trying to win enough votes in Parliament to pass the withdrawal agreement, which the EU Council has already approved. This is politically challenging: the bill has already been voted down three times and there are no significant changes to terms in this go around. Further, both May’s Conservative party and the Labour party remain split within between Brexit (leave the EU) and Bremain (remain in the EU). The Prime Minister was in talks with Labour party leader Jeremy Corbyn to attempt to secure votes, but these talks ended without resolution. As with any negotiation, no leader can be seen giving up too much to the other side.

Adding another level of complexity, Prime Minister May has announced that she will resign as Conservative party leader on June 7. The Tory leadership contest will start the following week, with a number of MPs ready to run. Theresa May will remain in her post until a successor has been found. Regardless, our panelists indicated they expect the stalemate to continue. If there is no withdrawal agreement by October 31, the U.K. could request another extension but uncertainties and risks, including a hard Brexit, remain.

The Withdrawal Agreement deals with the terms under which the U.K. leaves the EU including issues such as transition, citizens’ rights and money. Once the terms of withdrawal are approved, the two sides will turn to defining their post-Brexit trade and investment relationship.

In theory, a trade deal should start from a relatively “easy” place, i.e. taking terms from the World Trade Organization (WTO) that are designed to ensure no country gives more favorable terms to any one nation. (Of note, there are no WTO rules for services.) One of the main sticking points, both dogging efforts to secure withdrawal and overshadowing future relations, is the treatment of Northern Ireland. The Labour party wants to remain within the customs union. On the other side, the Conservative party, while not as focused on the customs union, is concerned about maintaining an open north-south Irish border, a key part in any potential withdrawal deal.

According to our panelists, the Irish border counts 70 million border crossings per month, and 80% of Irish physical goods/exports travel through the U.K. If there is no customs union, these goods will be hit with tariffs two times. In this scenario, Ireland, an EU member state, will be disproportionately harmed. The Netherlands also stand to lose in a no customs union scenario. They export a significant amount of fresh fruit and flowers to the U.K., with thousands of Dutch people’s livelihood reliant on this trade.

The 2019 SIFMA Operations Conference & Exhibition gathered nearly 1,000 operations and technology leaders for its 46th annual event. Watch replays of select sessions that delve into the dynamic and complex environment that is reshaping operations, the customer experience and market requirements.

“You don’t know what you don’t know, but at least you can plan for it.” This encapsulates the basic theme of the panel at SIFMA Ops. While financial institutions still do not know what Brexit will mean (or when it will happen), firms have no choice but to continue to prepare for the unknown. In fact, European regulators had informed firms that they needed to be ready by the March 29 (original) deadline. U.K. authorities had not made a similar statement. Our panelists indicated most global firms are operationally ready.

As panelists noted, Brexit is not just a concern for non-EU firms, it is impactful for European financial institutions as well. For example, both the prime services and commodities businesses were predominantly based in the U.K. for many of these firms. These institutions had to relocate these units in the EU. Firms of all nationalities must repaper thousands of client accounts and documents. Any relocating firm or legal subsidiary needs to apply for new memberships with exchanges and clearing houses. All firms are focused on maintaining continuity of service to their clients, not matter where they are located. As such, firms have worked to ensure operational readiness and minimize risk, whether it be in: end-to-end infrastructure; connectivity to market infrastructures and other market participants; legal entities and branch readiness; maintaining appropriate staffing across all entities; etc.

Additional nuggets of information from our panelists include: 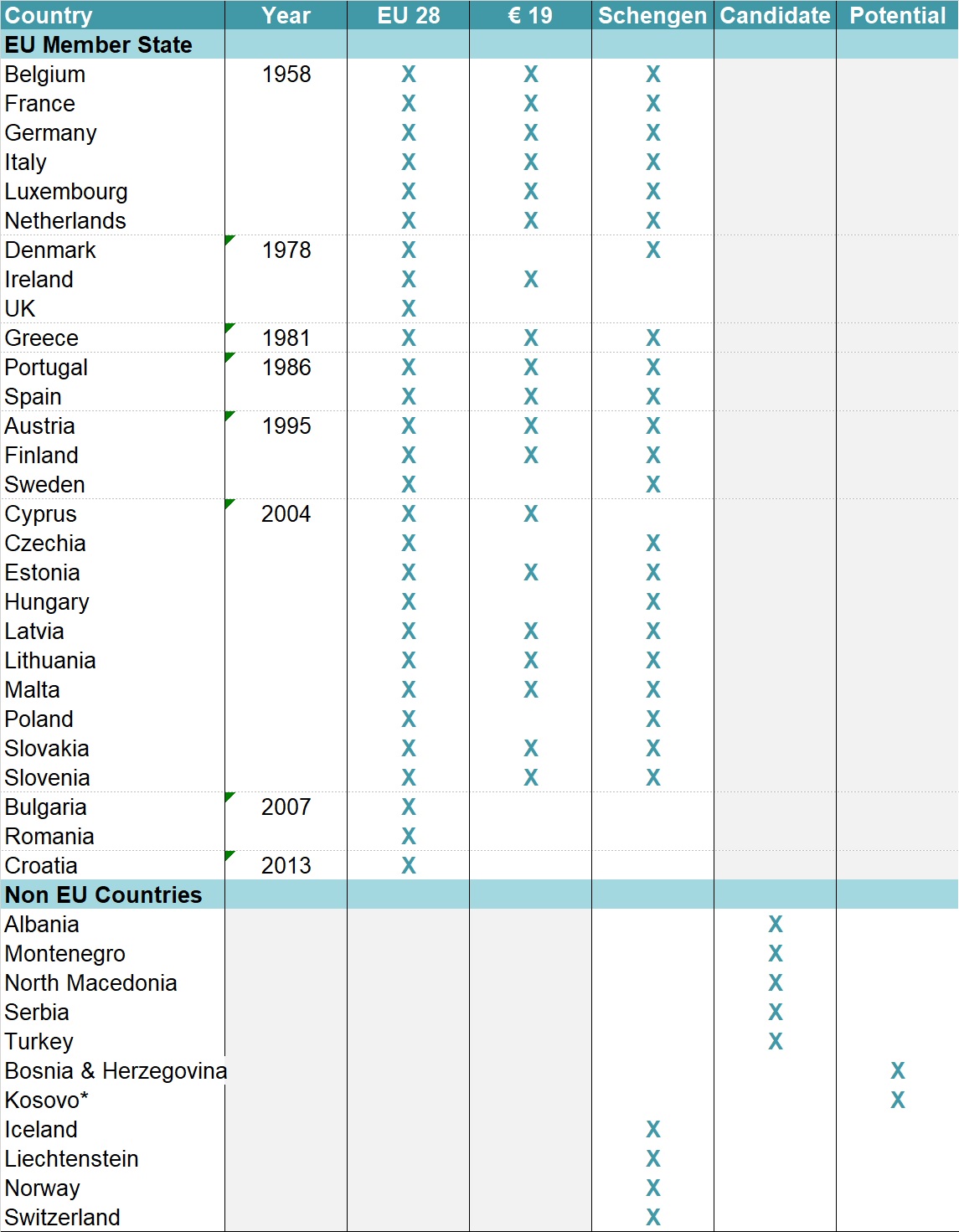 Source: EU website
Note: EU 28 = EU member states, UK included. €19 = use the Euro as currency. Schengen Area = no internal borders within which citizens & non-EU nationals can freely circulate without being subjected to border checks (has tightened controls at the common external border). Candidate country = in process of transposing (integrating) EU legislation into national law. Potential candidates = do not yet fulfill requirements for EU membership. *Kosovo designation is “without prejudice to positions on status in line with UNSCR 1244/99 & the ICJ Opinion on the Kosovo declaration of independence”

The Ramifications of a Financial Transaction Tax

A Chart Book on Stock Ownership U.S. capital markets are where investors, small and large, put capital to work to…