On March 5, ICE Benchmark Administration confirmed its cessation plan for LIBOR.  Most non-U.S. Dollar LIBOR tenors will cease on December 31, 2021.  To provide a smoother transition for legacy instruments, U.S. Dollar denominated LIBOR, the largest and most important tenors of LIBOR, cessation will occur on June 30, 2023.  LIBOR has a definitive end date, and regulators are demanding in no uncertain terms that their regulated institutions to move away from LIBOR this year.

There are undoubtedly certain issues requiring legislative action to guide the transition away from LIBOR to alternative reference rates.  In particular, there is a large stock of existing contracts and instruments that as a practical matter cannot be amended to utilize alternative rates.  SIFMA is supportive of Federal legislation aligned with recommendations from the Alternative Reference Rates Committee, or ARRC, to address these situations where contracts cannot be easily transitioned away from LIBOR due to legal or regulatory reasons.

We believe such legislation would benefit all market participants including LIBOR’s end users, from investors to companies to consumers, and would provide four key benefits: (1) certainty of outcomes, (2) fairness and equality of outcomes, (3) avoidance of years of paralyzing litigation, and (4) preservation of liquidity and market resilience.

So-called “legacy” transactions are LIBOR-based transactions that were executed prior to LIBOR cessation, and in many cases prior to the development/adoption of robust fallback language (e.g., 2019-2020).  They present special challenges for this transition.  Of the $223 trillion in outstanding LIBOR transaction, the ARRC estimated that 67% would roll off by June 2023, leaving about $74 trillion in LIBOR exposure extending beyond June 2023. $68 trillion of this is comprised of swaps, futures, and related transactions.  Many of these transactions can be amended and addressed by industry-wide protocols such at the ISDA protocol or by actions by clearing houses to convert outstanding positions. 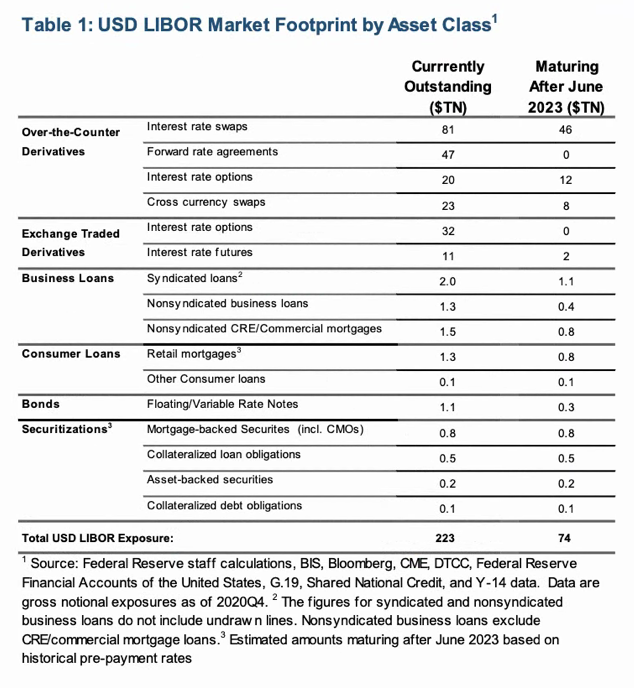 The remaining $6 trillion of exposures are comprised of various types of “cash” products – bonds, notes, loans, and other extensions of credit.  These products were not designed with a permanent cessation of LIBOR in mind, and in many cases, these products are difficult or effectively impossible to amend, due to regulatory constraints or practical issues such as identifying all of the holders of a widely distributed security.  There are tens of thousands of floating rate securitization and corporate bond transactions.  Some contracts don’t have fallbacks. More commonly, the fallback provisions would result in a floating rate bond becoming a fixed-rate bond. Other contracts fall back to the judgement of an issuer, administrator, or other party.

In the table below we lay out a common interest rate fallback regime in a legacy floating rate bond.  There are variations on this approach, but this is a very common framework.  Tens of thousands of floating rate bonds and notes would become fixed-rate instruments.

In other words, from a practical standpoint, the existing fallbacks aren’t effective. The outcome of a permanent cessation will not be in line with the expectations of issuers, investors, or customers, and may lead to vast amounts of litigation that ties up courts for years and causes major disruption in financial markets and investor portfolios.

Other instruments (such as mortgage loans or some bonds) will have an interest rate fallback regime whereby a noteholder or administrator will have the power to choose a “comparable” rate if LIBOR is not available.  This is also a problematic arrangement – it is not definitive and leaves the ultimate outcome up to the choice of that party which could create a diversity of outcomes for similar products, and of course what is ‘comparable’ is in the eye of the beholder.

The issues involved make it far too complicated to simply amend these problematic provisions.  Cash market transactions are not as standardized as most swap and futures contracts.  They are not typically exchange traded, and they are not based on industry-standard forms and documentation that can be amended on an industry-wide basis.  Broadly held LIBOR-based floating rate corporate bond or securitizations, which may have hundreds of holders, have consent requirements for amendments to the terms of these transactions—which would be impossible to achieve given the numbers involved, as bonds are held in street name for the benefit of the ultimate owners, making it difficult to determine who all of the holders are and to contact them.  In some cases, the Trust Indenture Act (“TIA”) is at the root of the consent requirement.  The TIA provides that “the right of any holder of any indenture security to receive payment of the principal of and interest on such indenture security…shall not be impaired or affected without the consent of such holder”, which has been interpreted to apply to interest rate provisions.  In the context of the transition away from LIBOR, this type of restriction is a roadblock to reform of transaction provisions.  We believe narrow and targeted relief from the provisions of the TIA is an important component of any Federal legislation.

Recognizing this problem, the ARRC created a working group to look at options and develop recommendations for tough legacy transactions.  In March 2021, the ARRC published a proposal for a statutory mechanism to address these ineffective legacy transaction fallback provisions.  The legislation proposed by the ARRC would create a statutory safe harbor from litigation and replace LIBOR-based fallbacks with those recommended by the ARRC, which would be based on SOFR.  The goals of the legislative approach are manifold: to provide certainty of outcomes to contract participants, to provide equality of outcomes to market participants, and ultimately to promote the liquidity and stability of financial markets.

Given that many financial contracts are governed by New York state law, the ARRC initially proposed this legislation in the state of New York. In sum, the ARRC’s proposed legislation would:

After years of work and advocacy by the ARRC and others including SIFMA, on March 24th, the New York Assembly and Senate passed legislation in line with the ARRC’s recommendation on a nearly unanimous vote and the Governor has signed the bill. While this is certainly a positive outcome, we believe there is more to be done at the Federal level.

The broad base of support for this legislation in New York stems from its of benefits to issuers, investors, and consumers.  These benefits include:

SIFMA strongly recommends that Congress enact legislation that is aligned with the ARRC’s approach.  While the New York legislation is useful as regards certain New York law-governed instruments, it is not a full solution even for many of those instruments and does not address any non-New York law contracts or Federal issues such as the Trust Indenture Act.  Only Federal legislation can address these problems.

Federal legislation can address all contracts governed by a state or federal law.  While a majority of corporate bonds and securitizations are governed by New York law, a vast number of loans, credit facilities, bonds, and other instruments are governed by state laws other than New York.  A uniform Federal law can promote benefits such as contract certainty, fairness and equality of outcomes, avoidance of years of litigation, and market liquidity – across the nation.  A patchwork of inconsistent, or non-existent, state legislation, cannot do this.

Federal law can address issues such as the Trust Indenture Act, and provide narrow, targeted relief that allows contracts to transition to more robust reference rates without impossible to meet unanimous consent requirements.  Federal law can also ensure that there are not adverse tax or other consequences to issuers, holders, or consumers.

While U.S. Dollar LIBOR is expected to be published until June 2023, we believe time is of the essence as regards proposed legislation.  Bank regulators are highly focused on moving as much activity away from LIBOR as quickly as possible.  Additionally, once legislation is passed, it is not the case that the provisions of the law are implemented immediately.  There are a large number of parties involved in these transactions, and it will take meaningful amounts of time for all parties to revise internal systems and models to account for changes to interest rate calculations, for transaction-level changes to be communicated to end-users, and for other steps that need to be taken to happen.