The U.S. securities markets are the deepest most liquid in the world.  The plumbing that underpins our markets, clearing and settlement, is incredibly efficient and resilient. This position was put to the test during two recent periods of dramatically high market volatility and volume.  The system performed well during the early uncertain days of the Covid-19 global pandemic and the recent market volatility surrounding the meme stock activity in January 2021.  The clearing and settlement system in the U.S. is complex with many different considerations and dependencies which required extensive analysis and planning when moving the U.S. settlement cycle to T+2.  The continued improvements in operational processes and technology will allow the industry to further shorten the settlement cycle to mitigate risk, improve operational efficiencies and maximize the use of capital.

Why Accelerate the Settlement Cycle?

Moving from the current securities settlement time of T+2, when trades settle in two days, to T+1, when they will settle the next day, is a complex undertaking with significant potential benefits for the U.S. capital markets.

Decreasing the time between the execution of a trade and settlement lessens the risk of a counterparty failing during this time.  The decrease in time between trade and settlement also reduces the amount of margin that the National Securities Clearing Corporation (NSCC) and the Depository Trust Company (DTC) members and participants, respectively, need to post, which reduces the capital required by the clearing agencies.  Increasing operational efficiency is a worthwhile change in our markets, and, as with most things which are worthwhile, will require a great deal of effort, industry-wide coordination, and a firm commitment to changing longstanding processes from all involved parties—broker dealers, the asset managers, and custodian firms.

What’s the Current Status & Which Products are In Scope?

SIFMA, The Depository Trust & Clearing Corporation (DTCC) and the Investment Company Institute (ICI) are committed to leading the industry’s collaboration on accelerating the settlement cycle.  We know from our work together on the move from T+3 to T+2 in 2017 that this undertaking pulls in each sector of the industry and spans multiple operations, functions, and regulations.  Unlike the move to T+2, the move to T+1 is a wholesale change to the processes which take place between execution and settlement.  This opportunity to transform settlement is wholeheartedly embraced by market participants.

We are currently undertaking an in-depth analysis of what the move to T+1 will require.  It is important to note the change applies not only to equities, but includes corporate and municipal bonds, agency securities, mutual funds, REITs, ETFs and others—in short, any product which currently settles T+2, below: 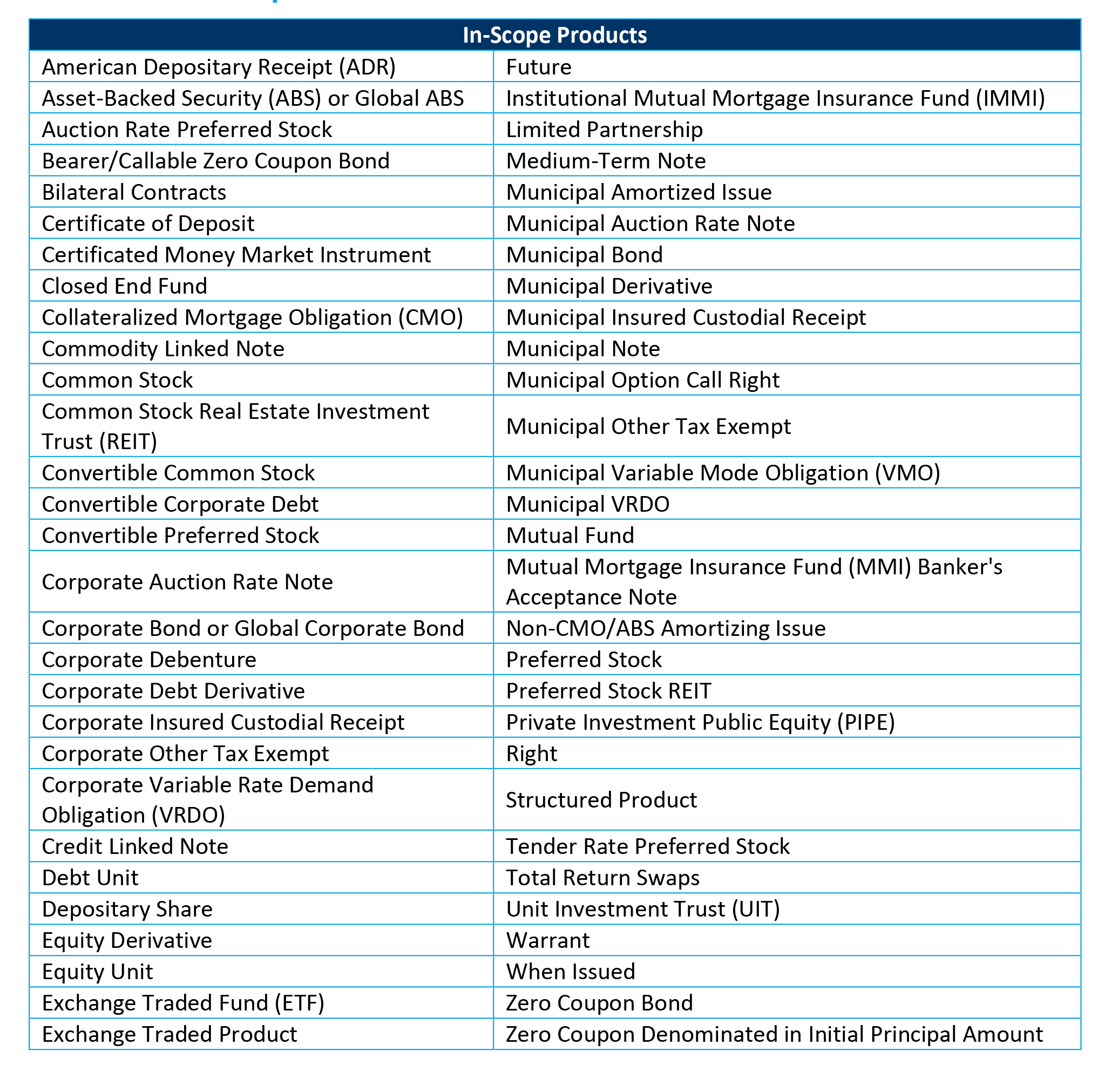 24 key areas impacted by a shortened settlement cycle have been identified and scored with an impact rating.  While all topics must be addressed, we are first focused on the 14 areas which will be most impacted.  This includes institutional trade allocations and affirmation/disaffirmations, documentation, global settlement and FX, securities lending, settlement errors/fails, and prime brokerage, among others.  We are holding industry wide workshops nearly daily over the next three months on each specific topic, determining key considerations for each area in the move to T+1 settlement.  Industry engagement is very high, with some sessions seeing close to 300 market participants.

We expect to complete this analysis by the end of the third quarter, 2021.  The information gathered during the analysis stage will be used to outline the subsequent steps on the path to T+1, and inform a timeline for each milestone, including identifying a firm implementation cutover date to accelerate settlement cycle.

The capital and liquidity improvements seen under the shortened settlement cycle will benefit every participate in the marketplace.  While we undertake the work needed to eliminate 24 hours from the settlement cycle, we are mindful that some products already settle in a T+1 timeframe.  Any change to the settlement cycle will require a thoughtful analysis and understanding between mitigating risk while preventing the unintended consequences of creating additional risk in the system.  Much like a scale, we want to ensure we move settlement one careful step at a time, so as to not mitigate risk on one end and increase it on the other.

A small number of industry participants have argued that the settlement cycle should move to T+0, or end of day settlement.  In fact, some trades do settle on the same day and a few counterparties have even conducted real time settlement for a limited number of securities trades. Ever shortening the settlement cycle as technology permits may be aspirational but considering the complexity and volume of the U.S. securities markets, and what needs to be done just to get to T+1, T+0, or real time gross settlement at this time is not achievable.  Further, T+1, let alone end of day, will need to address the reality that markets are global, and technology can’t ignore that.  In addition, a careful analysis would need to be conducted to understand the impact on smaller competitors in the marketplace and concentration risk.

From an implementation perspective, a transition to T+1 settlements will be difficult and must be carefully managed to avoid introducing any new operational risks.  It will require the entire industry to rethink industry processes, each participant’s role, and to understand the necessary changes both dependencies and timing.  Moving to T+0 or end of day would require fundamental changes to how investors fund trades or the process by which broker-dealers pre-fund transactions for their clients as they wait for the funds to become available.

Netting, which is the aggregation of obligations to create a net obligation, allows brokers to transfer money between parties only once at the end of the day.  This works well under T+2 and is expected to continue to operate smoothly under T+1.   Although challenging in a T+0 environment due to the significantly compressed processing time, in a real time settlement scenario, netting would not be possible and trillions of dollars in cash and securities would have to move through the financial system on a continual basis throughout the trading day. This would create market and capital inefficiencies, increase credit and operational risks, and increase costs between trading parties, possibly undermining the stability of the securities markets.  The technology and infrastructure to meet a T+0 or real time settlement cycle in scale doesn’t exist.  In addition, these types of changes would need to weight the impact on competition and risk concentration.   Additionally, under a T+0 settlement ecosystem, businesses such as securities lending and short-selling could be put at risk due to timing impacts to the ability to locate or recall securities on loan.

What are the International Implications?

There are also international and foreign currency (FX) considerations for specific international transactions in moving to a T+1 settlement cycle. Foreign counterparties to U.S. trades will need to convert their local currencies into U.S. dollars which settle normal way on T+2.  Accordingly, moving to a T+1 settlement cycle will require significant changes to current business processes and practices for foreign exchange conversion transactions, which is not currently feasible in a move to T+0 or real time gross settlement.  Without fundamental changes to the current infrastructure and processes, implementing a T+0 or real time gross settlement system would misalign the currency conversion and trade settlement which would lead to substantial number of fails in the system.

Accelerating the settlement cycle requires evaluating and managing the balance between settlement risk mitigation and the unintended consequences of increasing operational risk in the system.  The move to T+1 is a wholesale industry change to the processes between execution and settlement, and it benefits the broader system.  T+1 will not, and should not, deter counterparties the ability to settle even faster, as some do, nor will it deter the evolution and application of new technology to enhance the settlement infrastructure.  Done correctly, it should deliver greater operational efficiencies, substantially lower capital requirements and reduced risk in the financial system which are all critical goals we are committed to achieving with the industry.