By: Sean Davy and Randy Snook

America’s capital markets are the deepest and most liquid in the world. But, we’ve seen a troubling stagnation and sometimes decline in the number of public companies at a time when our economic recovery remains subpar. Is there a correlation?

The concept of capital formation is nothing new: investors are connected with entrepreneurs and businesses who seek funding, resources are pooled, and capital is in effect “formed” for investment purposes. What is remarkable is how efficient the U.S. capital markets have become at this process: 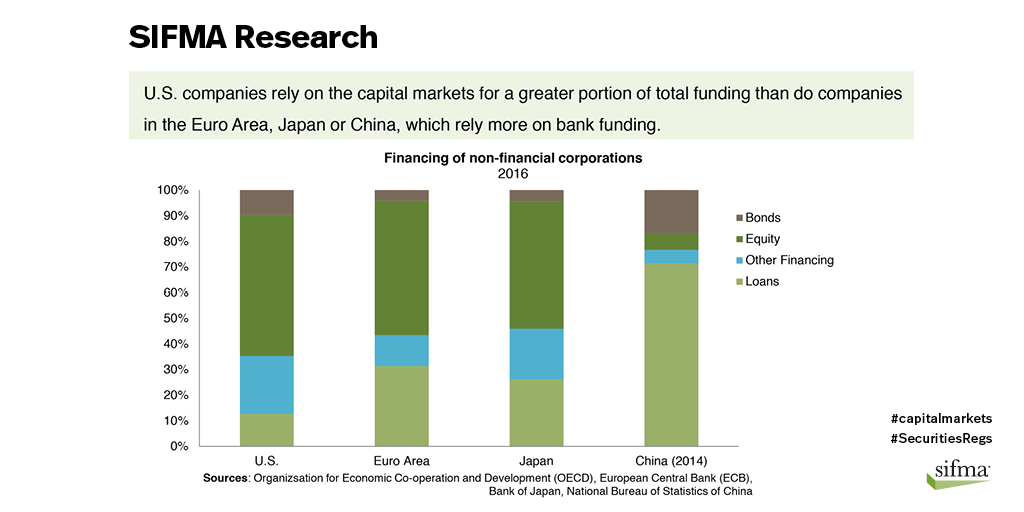 Our capital markets – envied the world over – are a critical source of financing for both domestic and foreign businesses and governments, particularly small and mid-sized businesses. Unfortunately, regulatory burdens are unduly hampering capital formation for these entities generally and may also be reducing small investors’ access to investment opportunities.

“In 1996, we had 812 IPOs and small cap companies made up almost 50% of the offerings. In 2016, we had 99 IPOs and small caps made up 13%. We’re doing something wrong,” said Warren Stephens, Chairman, President and Chief Executive Officer of Stephens Inc. at SIFMA’s 2017 Annual Meeting, The Capital Markets Conference.

“Clients are concluding that the public market source of capital is unattractive relative to M&A or private equity,” said Stifel Chairman and CEO Ronald J. Kruszewski. That is particularly true for small- to mid-sized businesses: Stifel estimates it costs those companies 75 bps more than a large one to raise capital in the debt markets today. Rattling off a list of regulations including Reg NMS, the Volcker Rule, Sarbanes Oxley and MiFID II, Kruszewski said we need to look at all the rules we have put in place that dissuade companies from accessing the public capital markets and ultimately decrease investment opportunities for the average investor.

Large co's have access to the #capitalmarkets but small ones don't "and this just seems fundamentally wrong" – Anne Mathias @Vanguard_Group pic.twitter.com/r4kBgXtzjh

“I don’t think there is any doubt,” said Stephens. “As well-meaning as we have tried to be in our regulations, they have stifled growth, they have stifled capital formation.” To complicate matters, the foundation of this increasingly complex regulatory framework dates back 80 years, put in place at a time when trading took place on floors with paper order tickets and telephones.

“I do believe that there is a danger in a one size fits all approach to public companies,” said Jay Clayton, Chairman of the U.S. Securities and Exchange Commission. He noted his support for the Jumpstart Our Business Startups (JOBS) Act, stating “I believe the shrinking number of public companies would actually be worse without it.”

Investor participation is another dimension of concern. Changes in regulation, including implementation of a best interest standard, might exacerbate the trend toward more client assets being managed in investment advisory accounts. Since new issuances are available through brokerage accounts, many retail investors may lose access to these investment opportunities and capital formation will suffer as a result. “The benefits of capital formation in my view are accruing to a smaller and smaller group of people,” said Stephens. “The retail IPO of years ago doesn’t exist. Individual investors really can’t participate in them.” Sources of capital for businesses are being limited in turn: private equity, family offices, venture capital and accredited investors.

“I think a broader portfolio of public companies is important to retail investors,” said SEC Chair Clayton who noted his support for a client’s right to choose. “If you continually shrink that pool, you don’t need a lot of academic studies to tell you that retail investors have the most efficient way to participate through that avenue. You are shrinking their choice, therefore increasing their cost because it costs them more to either not participate or participate in the private markets.”

“There’s no question the economy is doing well at the moment yet everyone feels it’s being held back a little bit,” said David Solomon, President and Co-Chief Operating Officer Goldman Sachs & Co.

We have a real, tangible opportunity to turn a weak economic recovery into a strong one. SIFMA believes Congress and the SEC should reassess existing regulations to allow more businesses to readily access U.S. capital markets while maintaining important protections for investors. Small and mid-sized businesses, in particular, are a great source of economic growth and job creation and financial regulation should be better tailored to support their access to capital. So that regulators can be nimble in their response to market developments, regulations should be flexible and principle-based, and come with sunset or frequent look-back requirements to ensure that they do not grow stale.

Our specific proposals include:

In this post, SIFMA's Kyle Brandon explains why, to avoid potential disruption to the legitimate uses of SBS for supporting capital…

Understanding the Current Regulatory Capital Requirements Applicable to US Banks

In this, the first of a series of blogs on prudential requirements and their impacts, we discuss revisions to bank…