The historic success of the U.S. capital markets has been bolstered by a regulatory framework focusing on investor protection, transparency, safety and soundness. The U.S. market regulatory structure was first put in place over 85 years ago, and Congress and policymakers have continually reviewed and supplemented it to keep pace with market and technological developments and a changing national and global economy.

Capital markets fund more than 70% of economic activity in the United States. Find out how their depth, liquidity and efficiency drives economies, opportunities and the American success story.

The U.S. and other jurisdictions adopted an unprecedented volume of new regulations over the last decade, affecting everything from market structure to capital standards and balance sheet liquidity. Our system is more transparent, safe and sound than in 2008.

Banks offering capital market services are now better capitalized than at any other time in history. Since the global financial crisis of 2007-2008, U.S. bank holding companies have built up substantial levels of capital and liquidity in excess of regulatory minimums and buffers.

Regulators require banks to hold capital to absorb unexpected losses that might arise, and common equity tier 1, or CET1, which consists predominantly of common stock, is considered the most absorbent of capital types.  Aggregate CET1 for the CCAR firms is up 72.9% since the crisis, growing at a 5.1% compound annual growth rate since 2009. (CET1 levels will experience adjustments as regulations and laws change.)

As the Fed said earlier this year, “these capital and liquidity buffers are designed to support the economy in adverse situations and allow banks to continue to serve households and businesses.” 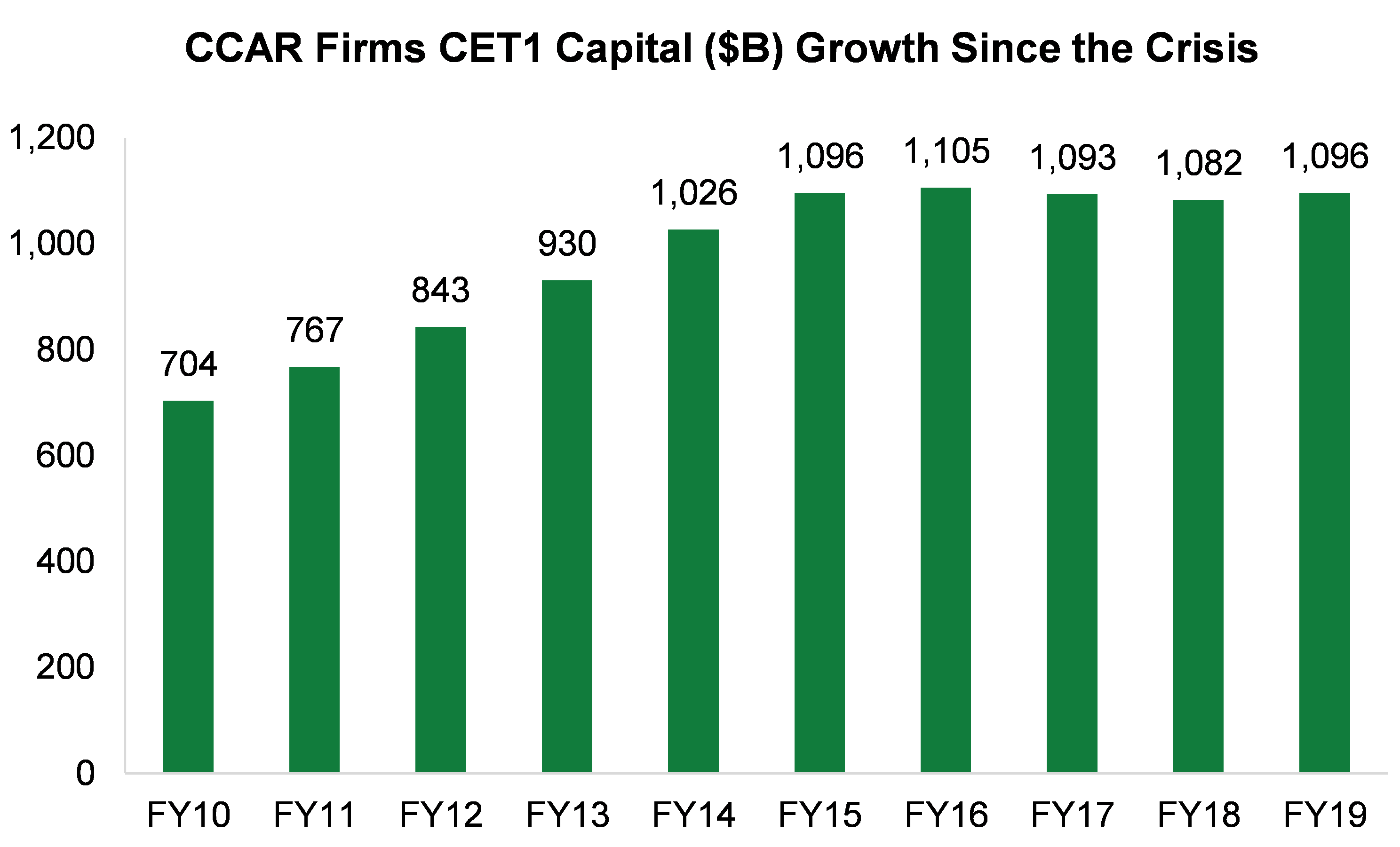 Source: Bloomberg, SIFMA estimates. Note: In FY18, some firms experienced one-time declines in CET1 due to the tax reform bill

The American economy operates as the most productive and resilient in the world and our capital markets play a critical role in facilitating that strength.

America’s capital markets fund 72% of all economic activity in the U.S. in terms of equity and debt financing of non-financial corporations and provide the lion’s share of credit supporting the U.S. economy. The use of debt capital markets to fuel economic growth is more prevalent in the U.S, at 79% of the total, vs. 24%, on average, in other regions. 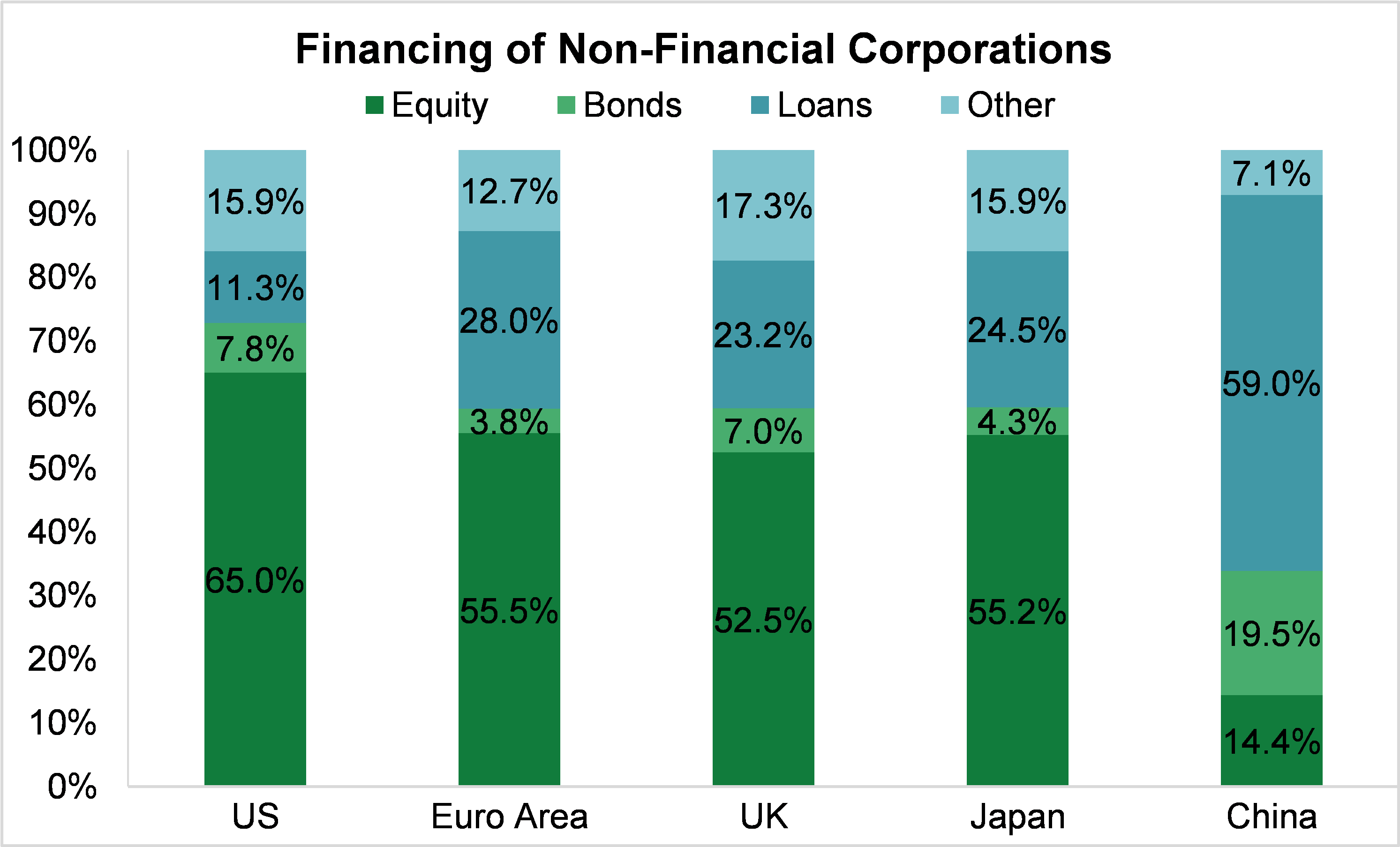 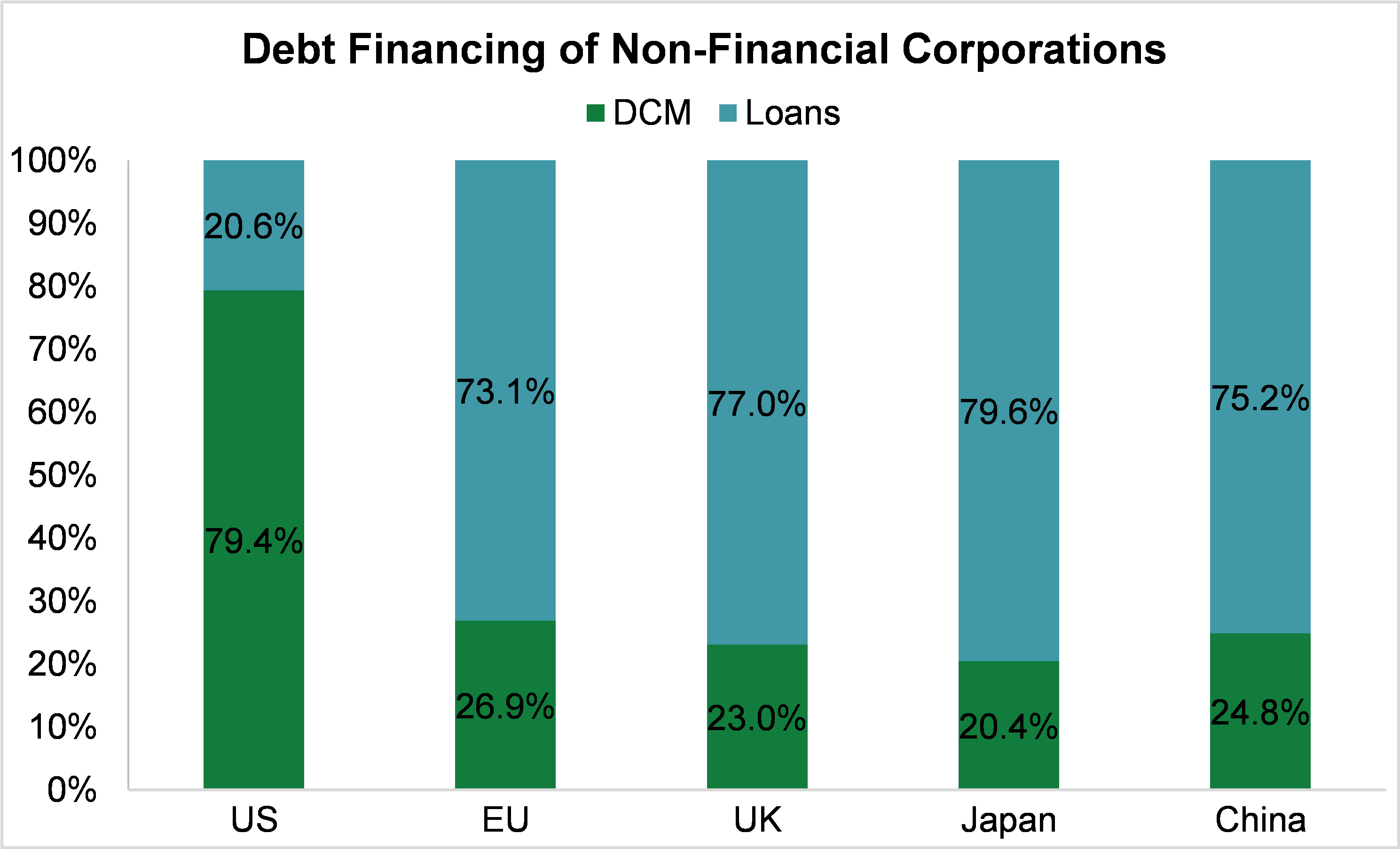 U.S. equities markets provide companies with capital for various business purposes – such as funding new plants and equipment, or expanding a successful business, among other things – and firms have several ways they can generate capital, including issuing IPOs and secondary equity offerings. IPOs allow businesses to grow, innovate and better serve their customers. In 2019, 151 companies conducted IPOs in the United States, raising $48.8 billion.

The U.S. corporate bond market is the largest in the world: over 1,000 companies issued $1.4 trillion in corporate bonds in the United States to fund their operations and growth in 2019.

The U.S. municipal debt market is one of our nation’s most remarkable financial institutions, providing a mechanism whereby more than 50,000 state and local government units can raise money for public purposes such as water and sewer systems, schools, highways and public buildings.  In 2019, municipal issuers raised over $426 billion in 2019 to finance important community infrastructure projects.

The U.S. mortgage-backed securities markets package and sell ownership interests in mortgage loans made by financial institutions. $2.1 trillion in MBS were issued in 2019. New risk retention rules put in place over the last decade make these securitized products safer for investors while still aiding in lowering the cost of borrowing for homeowners.

The COVID-19 pandemic created market volatility which was a real-time stress test. While markets in the US and abroad experienced significantly increased volatility and volumes and at times dislocation, capital market operations in the US did not falter during this period of extreme pressure, due in large part to technological innovations and common-sense regulatory changes implemented since the global financial crisis. Importantly, keeping markets open was crucial during this critical period to maintain investor confidence and return to more normalcy in terms of volatility and volume.

Highlights of our capital market strength:

The picture of our capital markets today is one of strength and safety. Ten years ago, when the Dodd-Frank Act was signed into law, the markets had just gone through an incredible shock. The new law was designed to shore up the financial system, and it has done so remarkably well.

In the decade since, policymakers have acknowledged that some changes may have gone too far, and there have been some changes. Many of these changes were done at the community and regional banking level while others were broader in scope. Regardless, it is important to be clear on what the changes encompass. While they have corrected some situations where rules were adversely impacting market efficiency and liquidity at the expense of economic growth potential, revisions do not in any way negate the Dodd-Frank Act, which remains the law of the land.

No law operates perfectly, and all laws need revision as society changes, markets and technology evolve, and we discover unintended consequences that must be addressed. By recognizing the need to evaluate and revise, we can ensure financial regulations achieve their purpose without doing harm to the economy.

Going forward, in order to help maintain the strength of our capital markets, we need to constantly evaluate the financial regulatory system to consider how it should evolve to continue to support our markets and facilitate investment and growth opportunities.

Kenneth E. Bentsen Jr. is president and CEO of SIFMA, the voice of the nation’s securities industry. He is also chairman of the Global Financial Markets Association (GFMA), of which SIFMA is the U.S. regional member.