In his testimony earlier this month, Federal Reserve Vice Chair for Supervision Quarles indicated that the Federal Reserve was currently conducting a series of additional sensitivity analysis using alternative scenarios and certain adjustments to portfolios to credibly reflect the current economic and banking condition as part of this year’s Comprehensive Capital Analysis and Review (CCAR) stress testing process. His remarks made clear that this would be separate from the analysis conducted under the severely adverse scenario announced earlier this year as part of the 2020 CCAR exercise. SIFMA has repeatedly expressed concern regarding the overly conservative nature and modelling issues related to the Global Market Shock (GMS) and the Large Counterparty Default (LCD) elements of CCAR designed to test market risk and the resiliency of firms’ trading books.

CCAR 2020 results are particularly impactful given the new SCB requirement coming into force in October. The SCB will require firms to replace the fixed 2.5% counter cyclical buffer (CCyB) with the new SCB, which is sized by peak to trough losses based on the severely adverse CCAR scenario and incorporates hypothetical losses generated by the separate GMS and LCD tests. We are very concerned the Federal Reserve may use the COVID-19 sensitivity analysis on top of the existing CCAR framework to force an unjustified increase in the size of the SCB.

Such a resizing could lead to a considerable increase in large bank capital requirements at exactly the point where banks need to provide credit and liquidity to households and businesses to facilitate economic recovery, contribute to orderly markets, and support financial intermediation in the capital markets.

During this recent period of stress, dealer banks’ balance sheets have expanded, appropriately so, to enable lending, debt issuance and drawdowns, providing liquidity to the economy as policy makers have intended.  A potential dramatic shift in the SCB sizing approach could create a capital-driven contraction in bank credit at exactly the wrong time for financial markets. While the trajectory of the economy over the next few months is deeply uncertain, it is undeniably intertwined with the ability of the U.S. to reemerge from the government-imposed shutdowns. Fortunately, we are now seeing some positive trends. One of the brightest spots in the economic recovery are the capital markets and its participants. Certain data points suggest the worst of the crisis may have passed and underscores why an alternative SCB approach is inappropriate and potentially harmful to economic recovery. It is also unclear why the Federal Reserve would want to push COVID-19 adjustments to the SCB at this time – particularly if it impacts the  GMS & LCD elements – given the general resiliency of financial markets.[2]

The COVID-19 crisis is very different from the economic crisis of 2008-2009, as it is a health-driven event not a financial one. Using some type of COVID-19, worst case scenario to size the SCB is a risky prophylactic strategy akin to prescribing medicine that does more harm than good for the patient. Pursuing such a procyclical capital policy may unnecessarily impede banking organizations from maximizing their vital intermediation role in the capital markets and the U.S. economy broadly.

Since the crisis more than a decade ago, there have been substantial revisions to the U.S. capital and liquidity rules to ensure the financial system is more resilient in the face of economic stresses.  Most notable is the considerable increase in capital requirements – both in aggregate and against those products whose risks were determined to be underrepresented in the previous framework (e.g., certain securitization products).

Regulatory changes have also included refinements to the definition of qualifying regulatory capital, in particular requiring the preponderance of capital to be the most loss absorbing type of capital, Common Equity Tier 1 (CET1). Banking supervisors put in place several regulatory and management capital and liquidity buffers layered on top of regulatory capital and liquidity minimums to ensure added protection.  In addition, the current comprehensive approach to recovery and resolution planning requires the pre-positioning of capital and liquidity to ensure firms that experience sizeable challenges have embedded resources to address weakness and the capability to recapitalize and fund the surviving entities in case they are unable to survive.

As recently reported in the Board of Governors of the Federal Reserve’s Supervision and Regulation Report, “the banking industry came into 2020 in a healthy financial position.” [3] CET1 capital ratios for U.S. banks have nearly doubled since the financial crisis reaching close to 12% at year-end 2020 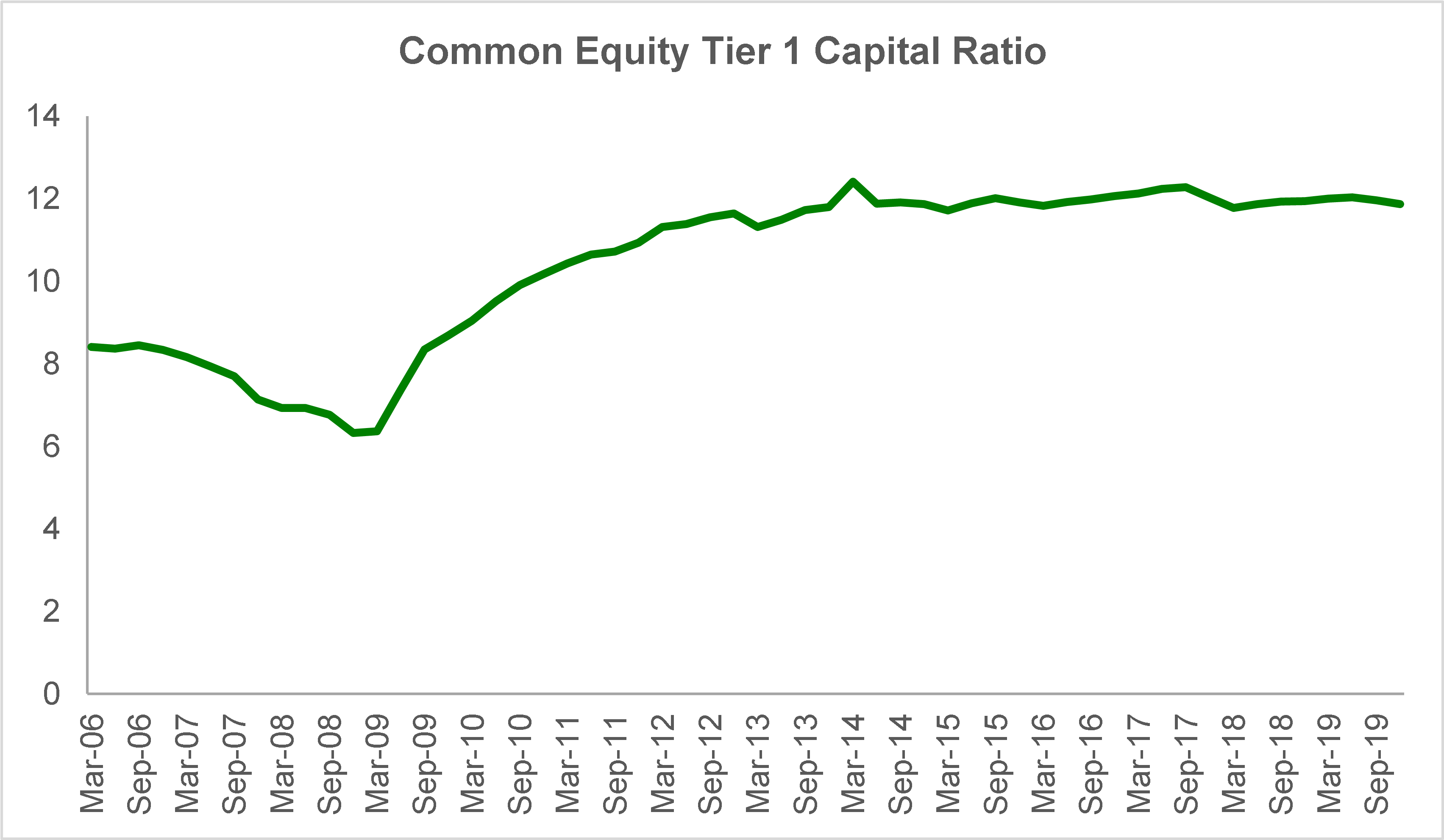 The impact of COVID-19 was evidenced in 2020Q1 results where for the largest banking organizations’ CET1 capital ratios decreased by 50 basis points to 11%. However, this decrease was a function of the dramatic expansion of risk weighted assets – namely deposits and preemptive draws on committed lines of credit. To preserve capital given the COVID-19 economic uncertainty, the largest banks suspended stock buybacks which are the primary component of their capital distributions.

Further demonstrating the resilience of the financial system, banking system liquidity as measured at the end of the Q1 was robust with slightly over 18% of total assets considered highly liquid. This represents nearly three times the level of liquidity assets as measured on September 30, 2007.

The U.S.’s rigorous regulatory capital expectations and the robust financial condition of our largest banking organizations should be enough to dissuade the Federal Reserve from pursuing an untested methodology based on a limited data set during the COVID-19 health crisis and maintain the current validated approach. Furthermore , the Federal Reserve has multiple supervisory tools – including the authority to issue capital directives[1] – that should also provide them considerable added comfort to maintain the current testing framework.

Significant U.S. Government Efforts Have Been Taken to Stabilize the Economy

The efforts taken by the U.S. government, including by the U.S. Treasury and the Federal Reserve, is unprecedented. Programs and actions were put in place to stabilize markets, provide mid and large- size corporates with access to short and medium-term funding, facilitate the continued employment of employees in small businesses, ensure that households and business have continued access to credit that is funded by asset-based securitization and provide financing alternatives to municipal borrowers. The U.S. government also provided a series of monetary disbursements to directly assist impacted households. It is important to note that many of these programs have yet to be fully operationalized or may ultimately not be needed based on the return to accommodative market conditions.  In stark contrast, the Federal Reserve’s potential adoption of a procyclical and currently unnecessarily conservative approach to sizing the SCB appears could undermine these government efforts including the Federal Reserve itself. Should the SCB be sized based on the COVID-19 alternative scenario, it may be implemented at great cost to the U.S. economy and all its participants.

As a direct result of the government-imposed shutdown and the fear of rapid and widespread COVID-19 virus transmission, the latter half of March was difficult for the capital markets. There were significant declines across almost all broad indices and asset classes. Those declines, however, proved to be short lived with most asset classes returning within 10% of January 2, 2020 levels by the May 28, 2020.

The disruption in the equity cash and option markets was pronounced[2] though markets stabilized in early April across all the equity indexes. By May 20, two of the four major indices – The S&P 500 and the Dow Jones – were within roughly 9% and 15% respectively of their January 2, 2020 close. The Nasdaq has not only fully recovered but surpassed its January 2, 2020 close by 3%. The Russell 2000 has been the lone laggard. 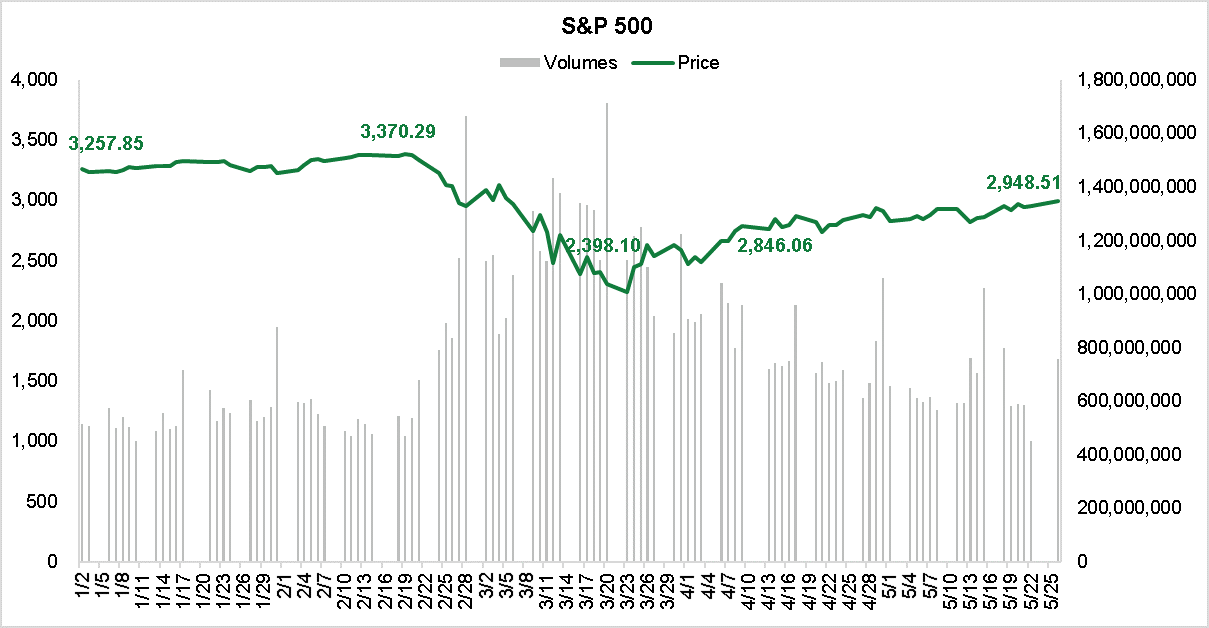 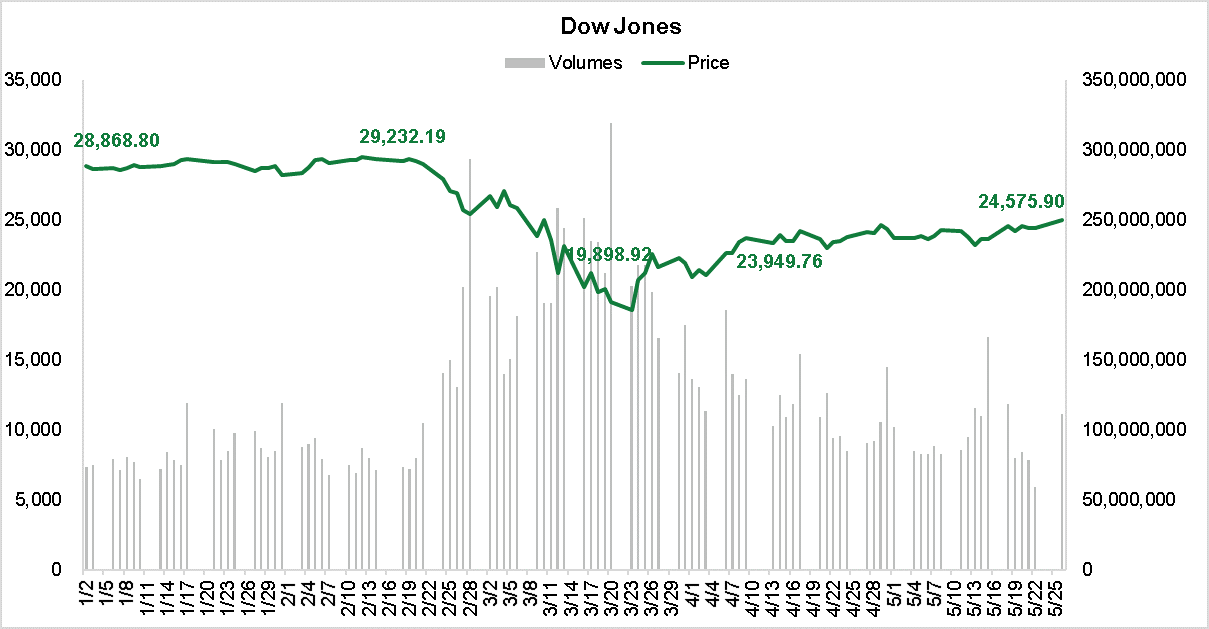 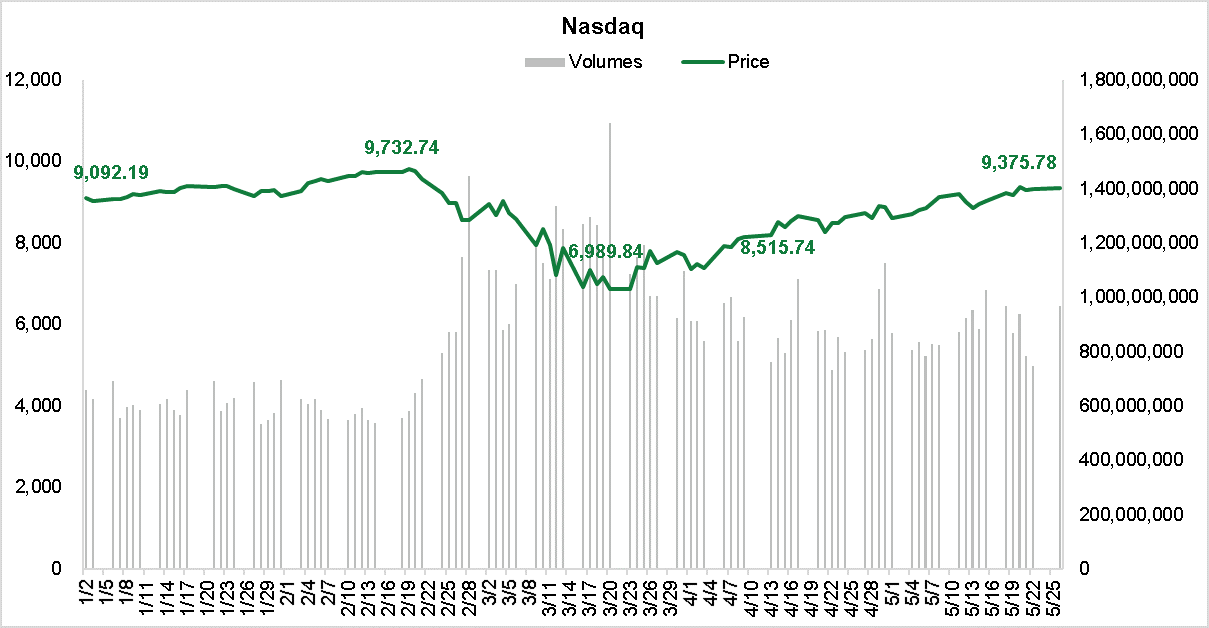 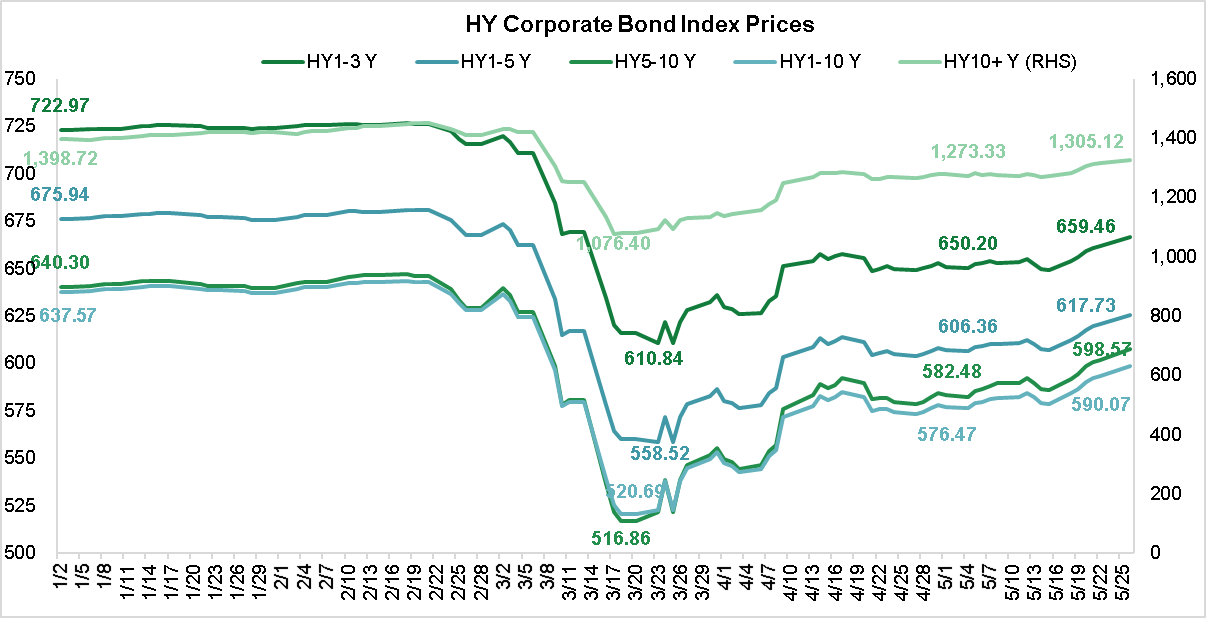 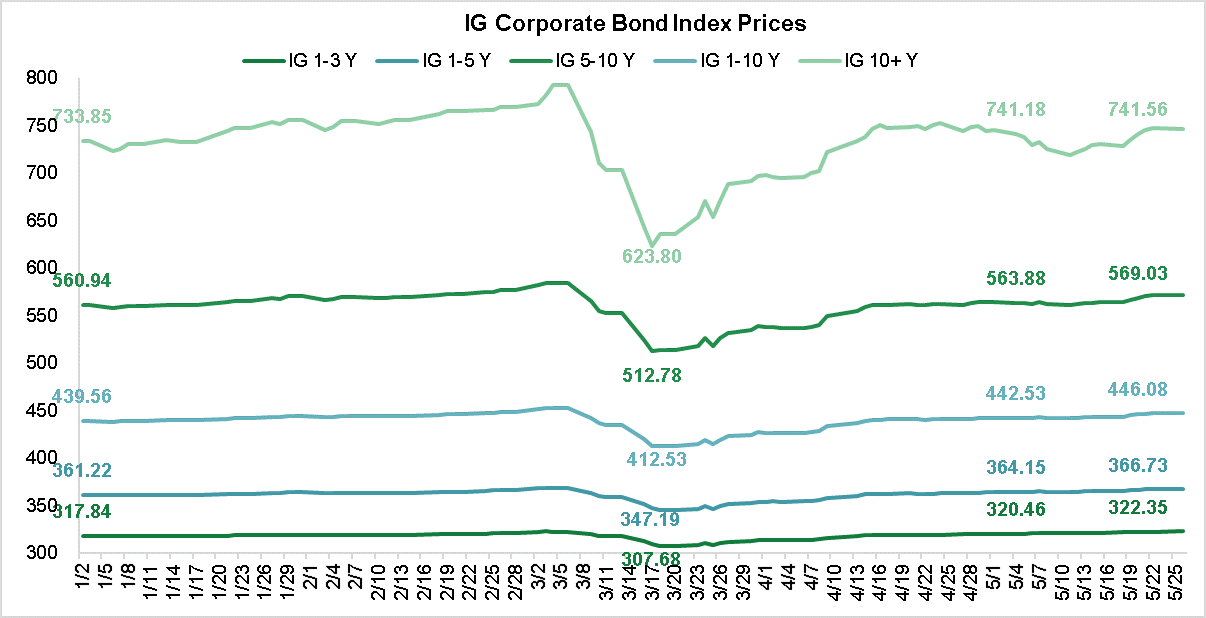 For asset classes not represented here, it was a similar story: the depth and tenor of the dislocation was challenging but reasonably short lived.  Not all asset classes are trading at or above their January 2, 2020 levels but for most asset classes there has been a reasonable recovery.  Consequently, it is hard to support or rationalize the application of more severe global market factor shocks as part of a COVID-19 adjusted CCAR than what is already applied as part of CCAR.

The next few months will bring clarity around the extent and permanence of damage to the U.S. economy. With all U.S. states in various phases of reopening, and some positive developments regarding COVID-19 virus containment, there is no compelling case, particularly related to the capital markets, to step away from current validated methodologies for CCAR including sizing the SCB.

The banking system, by the Federal Reserve’s own assessment, entered this crisis sufficiently resilient. This affords the Federal Reserve the time to gain a better insight into economic trends. Pursuing a COVID-19 adjusted strategy to size the SCB particularly at this point of the economic recovery may result in a self-fulfilling prophecy.

Coryann Stefansson is Managing Director and Head of Prudential Capital & Liquidity Policy. Stay tuned for further publications and quantitative analysis of the CCAR 2020 Global Market Shocks (GMS) against the backdrop of a potential COVID-19 sensitivity analysis.

[5] The energy markets are not discussed in this paper but will be captured in the GMS analysis.

Key Takeaways Despite positive economic trends noted in early June, the application of a rigorous stress test in February 2020,…

Next week on October 20th,  the federal banking agencies will publish the finalized Net Stable Funding Ratio (NSFR) rule.  The…