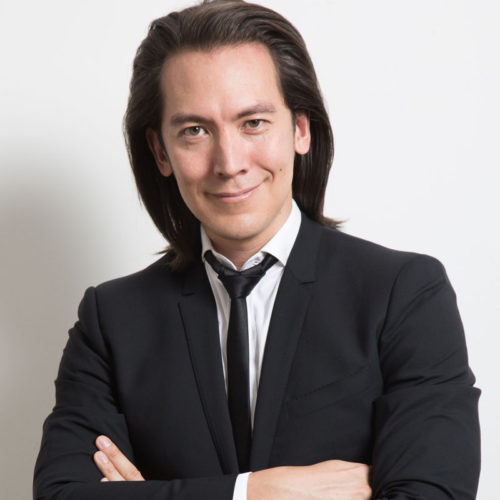 The CEO of Tomorrow, a global advisory on designing business for the 21st century, Mike brings a strong research background and consultative approach to personalizing insights and recommendations for his audiences. He specializes in identifying ‘mind grenades’ or provocative questions that will challenge your team and stretch their thinking. His specialty is being able to straddle the two worlds of emerging technology and business leadership, translating cutting edge innovation into practical and prescriptive advice about new ways of working and transformative mindsets to reinvent their organizations and their role in them.

His latest book, The Algorithmic Leader: How to be smart when machines are smarter than you, offers a hopeful and practical guide for reinventing leadership and organizations.

The book has been a global hit and is now available in Chinese, Japanese, Korean, German, Polish and Russian. Mike’s other books include Futuretainment (winner of the design award by the Art Director’s Club in New York), published by Phaidon, and The Dictionary Of Dangerous Ideas.

A prolific writer and commentator, Mike’s writing and views have featured in a wide range of international publications including the Harvard Business Review, BusinessWeek, Forbes and the Wall Street Journal. You will find some of those articles here.

Mike has been a pioneer in the digital space since the 1990s, running both successful start-up ventures as well as holding senior leadership positions in established media organizations. With a background in corporate law and management consulting, he began his career at XT3, a spin out from McKinsey and one of the first digital consulting firms created to help major companies embrace the embryonic Web. During the first dotcom boom, Mike launched the technology publishing group internet.com in Australia, which went on to become the leading local technology news and events platform in the country.

He also founded and ran Jupiter Research in the Asia Pacific, one of the first research agencies to track the early adoption of e-commerce and digital business models by online consumers. During this period, he was recognized as one of Australia’s “Top 30 Entrepreneurs Under 30.”

After his experiences in the Web space, Mike spent five years in senior strategy roles at News Corporation where he helped shape the digital strategy for both their Australian newspaper and Asian TV divisions. Directly engaged by the CEO of Star TV to provide the company with a digital roadmap for their operations, he began his in-depth research into the fast growth markets of Asia.

While in Hong Kong and inspired by the dramatic changes taking place in China and India, Mike founded his latest venture, Tomorrow – an innovation research lab focused on emerging technology and disruptive consumer behavior. Always in demand for his fresh insights and practical future-focused strategies, Mike has advised the CEOs and senior management teams at multinational companies including: the BBC, Fujiﬁlm, Richemont, MSN, Star TV, Televisa, Philips, and HSBC.

In addition to his corporate profile, Mike is a published photographer and supporter of the Arts. His photographic images from his travels around the world helped his book, FUTURETAINMENT, win an Art Director’s Club award in NYC. He has also served on the Director’s Circle at the Australian Museum of Contemporary Art.

As a global nomad and consumer trend scout, Mike does live research, in the trenches, with big corporations and entrepreneurs all over the world bringing a truly global perspective to every event.