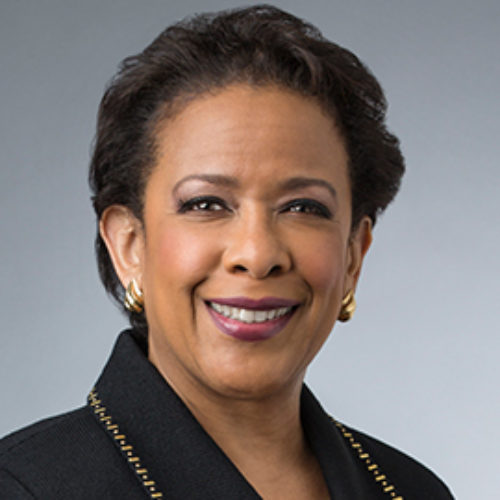 Ms. Lynch served as the U.S. Attorney General from 2015-2017, where she was appointed by President Barack Obama. As Attorney General, Ms. Lynch oversaw more than 100,000 employees across numerous agencies and offices, including the 93 U.S. Attorneys; major investigative agencies, including the FBI, the Drug Enforcement Administration (DEA) and the Bureau of Alcohol, Tobacco, Firearms and Explosives (ATF); the U.S. Marshals Service; the Bureau of Prisons; the National Security Division; and the Office of the Solicitor General, among others. She also supervised the DOJ’s major litigating divisions, including Antitrust, Civil, Civil Rights, Criminal, Environment and Natural Resources, and Tax.

Ms. Lynch returned to private practice in 2002, where she specialized in commercial litigation, white-collar criminal defense and corporate compliance issues. During this period, Ms. Lynch also served on the Board of the Federal Reserve Bank of New York and was Special Counsel to the Prosecutor of the International Criminal Tribunal for Rwanda.

In 2010 Pres. Obama appointed Ms. Lynch once again as U.S. Attorney for the Eastern District of New York, where her office would go on to prosecute major terrorism, fraud and corruption cases. In the wake of the global financial crisis, she supervised the investigations of and subsequent high-value settlements with a number of global banks stemming from the banks’ involvement in the mortgage securities market, as well as in a settlement with a global bank related to the Bank Secrecy Act.

Ms. Lynch received her J.D. and her B.A. in American Literature from Harvard University.