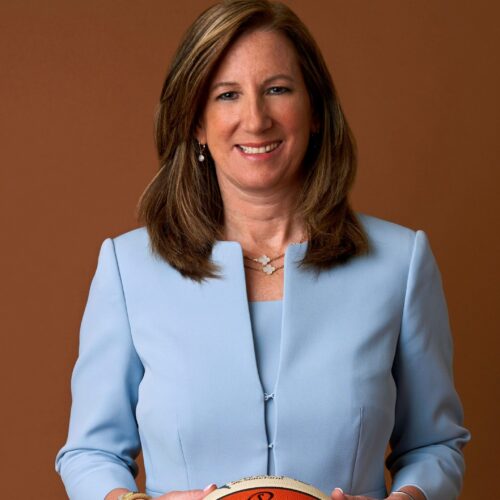 Cathy Engelbert was appointed Commissioner of the WNBA in May 2019.  As Commissioner, Engelbert is responsible for setting the vision for the WNBA and overseeing the league’s strategic direction, day-to-day business, and basketball operations. Since she stepped into the role of Commissioner, she has executed a historic player-first Collective Bargaining Agreement, build and socialized a new economic framework to drive league revenue and owner success, and led the league’s twelve franchises through the COVID-19 pandemic.

Previously, as CEO of Deloitte, Engelbert was first woman ever to lead a Big Four professional services firm in the U.S. where she led one of the largest professional services organizations with more than 100,000 professionals.  Over the course of her tenure, she led a large transformation across the business by moving the firm towards emerging technologies such as AI, blockchain, robotics and cloud, including securing ecosystem partnerships with large technology companies, and executing digital acquisitions.  During her tenure, revenues grew more than 30 percent, and Engelbert drove a people-first agenda, including implementing a holistic well-being culture through programs like Deloitte’s 16-week family leave policy.

Engelbert received a B.S. in accounting from Lehigh University and is a certified public accountant licensed in Pennsylvania, New York and New Jersey.  During her time at Lehigh, Engelbert was a member of the university’s basketball and lacrosse teams and served as a senior captain for both teams.  On the court, she played for former Lehigh coach and Naismith Memorial Basketball Hall of Famer Muffet McGraw.  Engelbert’s father, Kurt, played for Naismith Hall of Fame coach Jack Ramsay at Saint Joseph’s University and was drafted in 1957 by the NBA’s Detroit Pistons.

Engelbert is married and has two children.